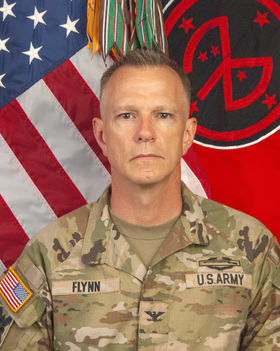 SYRACUSE, NEW YORK (07/14/2021) (readMedia)-- Colonel Sean Flynn, a veteran of the wars in Iraq and Afghanistan, who served in the Operation World Trade Center response to the 9/11 terror attacks, will take command of the New York Army National Guard's 27th Infantry Brigade Combat Team during a ceremony at Fort Drum on Saturday, July 17.

Flynn will take over from Colonel Robert Charlesworth who has headed the brigade since 2019.

The 27th Infantry Brigade Combat Team has units across the state from Manhattan to Buffalo.

Members of the media are invited to cover the change of command ceremony.

WHO: Col. Sean Flynn, the incoming commander, Colonel Robert Charlesworth, the outgoing commander who is retiring after 28 years in the Army, Major General Robert Spencer, the commander of the 42nd Infantry Division, and Soldiers of the 27th Infantry Brigade.

WHAT: A traditional military change of command in which the flag of the 27th Brigade will be transferred from Charlesworth to Flynn by Spencer, signifying the transfer of authority for the 4,000 Soldiers of the Brigade. The ceremony was designed so the unit's Soldiers could see who they would follow into battle in the days when the unit colors followed the commander on the battlefield.

WHERE: Building 855, the New York National Guard Armory, on Fort Drum. Access Through the Oneida Gate of State Route 26.

Flynn, who began his military career in the Air Force, is a full-time National Guard officer. While serving as the brigade commander, he will continue to work as the New York Army National Guard as Director of Plans, Training and Operations.

""In this position Colonel Flynn will be a tremendous commander, mentor and Soldier who will represent the brigade at the highest and most professional level. "," said Major General Thomas Spencer, commander of the 42nd Infantry Division.

Flynn joined the New York Army National Guard in 2000, where his key assignments include Platoon Leader and Company Commander in the historic 1st Battalion, 69th Infantry Regiment – the "Fighting 69th" – in New York, Executive Officer of the 2nd Battalion, 108th Infantry Regiment in Utica, Battalion Commander of the Fighting 69th, Brigade Executive Officer of the 27th IBCT in Syracuse, and Division G-3 and Chief of Staff of the 42nd Infantry Division in Troy.

Prior to joining the Army, Flynn served in the U.S. Air Force from 1994 to 2000, with active duty assignments as a Public Affairs Officer for the 81st Training Wing in Biloxi, Mississippi and the 354th Fighter Wing in Fairbanks, Alaska.

Flynn earned his commission in 1994 through the Air Force Reserve Officer Training Corps.

Flynn worked in New York as a financial communications and public relations consultant from 1997 to 2006 before becoming a full-time military officer.

Flynn is a graduate of the Infantry Officer Basic and Advance Courses, the U.S. Army Command and General Staff College, and the Department of Defense's Joint Public Affairs Officers Course.

He holds a Bachelor of Arts Degree in Journalism from the University of Maryland at College Park and a Master's Degree in Strategic Studies from the U.S. Army War College.

Flynn is the author of The Fighting 69th: From Ground Zero to Baghdad (Viking 2008), a narrative non-fiction account about the evolution of the National Guard from a strategic reserve to an operational force in the wake of the attacks of September 11, 2001.

He resides in Albany, N.Y. with his wife Lori Ann and their two children.

The 27th Infantry Brigade Combat Team is headquartered in Syracuse and is a light infantry brigade of more than 4,000 Soldiers, composed of three infantry battalions, a cavalry squadron, an artillery battalion, a brigade engineer battalion and a support battalion. Elements of the brigade are located across New York from Long Island to Jamestown.

One battalion, the 1st Battalion, 182nd Infantry is part of the Massachusetts Army National Guard.

The 27th Brigade traces its history back to the 27th Division of World War I. Originally known as the 6th Division, the unit was composed of New York National Guard units and was renamed for service in France in 1917.

During World War I, the 27th Division served under British Army command and helped defeat the Hindenburg Line during the attacks which ended that war. In World War II the 27th Division fought in the Pacific, invading the islands of Makin and Saipan and fighting on Okinawa.

In 1968 the division was reorganized as a brigade. In the 1980s the 27th Brigade was reconfigured as an enhanced brigade and was slated to "round out" two Active Army Brigades of the 10th Mountain Division at Fort Drum.

Elements of the 27th Brigade were mobilized for security duties at airports and other critical locations as part of Operation Noble Eagle following the attacks of Sept. 11, 2001. In 2008 the brigade deployed to Afghanistan as the main elements and command of Combined Joint Task Force Phoenix, a multi-national training mission in Afghanistan.

In 2012 the brigade deployed once again, with some elements serving in Kuwait while others deployed to Afghanistan.

The brigade is preparing for a deployment to Europe next year in support of NATO.