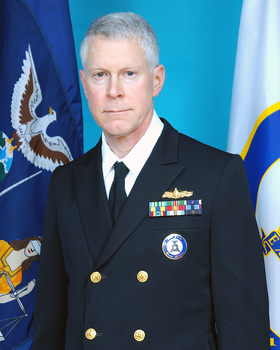 He relieves Rear Admiral Timothy Zakriski, a Glenville resident, who took command of the Naval Militia in June 2018 and is retiring.

Members of the press are invited to cover the naval change of command ceremony.

WHAT: The New York Naval Militia is comprised mainly of members of the Navy, Marine Corps, and Coast Guard Reserve who also volunteer to serve on New York state missions when called.

Smith will take over command of the Naval Militia in a traditional naval change of command which will include bosun pipe calls, the ringing of bells, the presentation of flags and remarks by the incoming and outgoing commanders.

The traditional Navy change of command ceremony and the opportunity to interview both the incoming and outgoing commanders.

For access to this secure military facility, members of the press must contact the Division of Military and Naval Affairs Public Affairs Office at 518-786-4581.

The New York Naval Militia traces its history back to 1889 before there was a Navy Reserve. Naval Militia members served as a naval National Guard and saw service in the Spanish-American War, World War I, World War II and Korea.

Warren Smith, a Rhinebeck resident, and retired Navy Reserve officer, has been promoted to rear admiral in the New York Naval Militia on Sept. 9, 2019. A rear admiral is a one-star admiral.

Smith, an architect and a principal of his own firm, Warrant Temple Smith Architects, LLC, formerly served as the deputy commander of the Naval Militia.

Smith was commissioned in the Navy in March 1981 and served on active duty until July of 1985. He served on board the USS Towers, a destroyer, and the USS Yorktown, a guided missile cruiser.

As a Navy Reserve officer, Smith took on a variety of assignments to include joint public affairs operations officer for the United States Atlantic Command and a Joint Staff Planner for Area Air Defense Commander Atlantic.

Smith, who is a surface warfare officer, joined the New York Naval Militia in 2004 and retired from the Navy Reserve in 2007.

Rear Admiral Timothy Zakriski is a native of Glenville, NY, a graduate of Niskayuna High School and Hudson Valley Community College. He holds a B.S. in Civil Engineering from Union College.

Formerly serving in the Marine Corps Reserve, Zakriski was commissioned an ensign, Civil Engineer Corps, and Navy Reserve in 1982.

Zakriski joined the New York State Naval Militia in 1980. As a member of the Navy reserve and a Navy Civil Engineer Corps officer, Zakriski first served in an advisory capacity to the Naval Militia Commander on Naval Construction Force (Navy Seabees) capabilities.

Subsequently he was appointed as commander of Naval Militia Northern Command and then in 2016, Zakriski was appointed Naval Militia deputy commander. He participated in New York Naval Militia response to Hurricanes Irene, Lee, and Tropical Storm Sandy, during which 300 Navy, Marine Corps and Coast Guard Reserve personnel were mobilized for service as militiamen, throughout the affected areas of the state.

Zakriski is married to the former Kathleen Russell, and they have two sons. In his civilian life, he is the owner of Aero Engineering. He began his professional civilian career performing construction management and engineering for consultants and contractors.

He entered the public sector in 1980, working at the N.Y. Department of Public Service for 30 years, retiring in 2011 as Chief, Telecommunications Programs. Subsequent to his retirement he worked with FEMA in the aftermath of Hurricane Irene as a technical specialist on infrastructure recovery. He is a registered professional engineer in New York.