Award will be presented in May 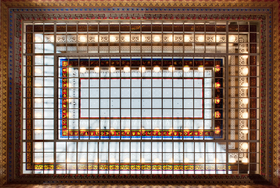 "By all accounts, this is a breathtaking project. The removal of infill construction from decades ago and the reintroduction of natural light has restored a degree of grandeur for elected officials, staff and visitors alike," said Jay DiLorenzo, president of the Preservation League. "The Awards Jury remarked favorably on the tasteful integration of modern design elements when no historic guidelines were available. As Albany City Historian Tony Opalka noted, since he worked as a tour guide at the Capitol some 40 years ago, he has seen the building 'go from a neglected historic gem to a showplace that should instill pride in all New Yorkers.'"

The approach taken by the New York State Office of General Services towards the reintroduction of skylights and laylights of the New York State Capitol Building will leave a beautiful legacy for generations to come. Their attention to detail and careful restoration has not only visibly brightened the Assembly and Senate staircases for all who use them, but has improved the overall impression of the building as a whole. The intricacies found within the glasswork and in the paint show dedication, care and skill; they have demonstrated that the Capitol Building is something all New Yorkers should be proud of.

"Governor Cuomo made the acceleration of this project a priority so that visitors could truly appreciate the splendor of this exceptional building. Having worked in the Assembly for almost 20 years before joining OGS as commissioner, I have seen the Capitol change from an unwelcoming dark space to something that is truly spectacular and worthy of the vision of its original architects," OGS Commissioner RoAnn Destito said. "It is an honor to be part of an effort by so many to complete this final phase of the rehabilitation of the Capitol roof, the centerpiece of which is the restoration of the laylights and skylights of the Assembly and Senate Staircases. The dedication of the legions of talented people who touched each facet of this loving restoration is evident in every detail of the work."

"As we launch our 40th Anniversary celebration in 2013, the Preservation League is looking forward to exploring not just the past, but the future of historic preservation. Many of the 2013 award winners provide valuable examples for other practitioners by incorporating energy efficiency techniques, adaptive reuse strategies and Federal and State Historic Rehabilitation Tax Credits," said DiLorenzo. "Each year, we are impressed by the number and variety of laudable nominations, and this year was no exception. We are delighted to celebrate the renovation of the skylights and laylights within the New York State Capitol Building and to commend the New York State Office of General Services for their stewardship."