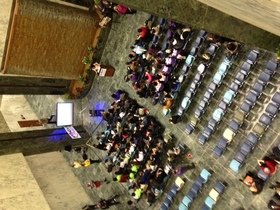 Picture of gun control lobby day taken inside the Well. Notice all the empty seats.

ALBANY, NY (04/26/2012)(readMedia)-- The New York State Rifle & Pistol Association calls yesterday's gun control rally inside the Legislative Office Building a total farce. Unable to demonstrate any sort of public support for their proposals, antigun legislators and New Yorkers Against Gun Violence, held a dog-and-pony show in the Well of the state legislative office building for a handful of people who were bused in from New York City.

Addressing scores of vacant seats in an almost empty hall, legislators lined up to speak to the couple of dozen or so people who had skipped school in order to be there, and reiterated their support for the same, failed gun control policies they have been promoting for years to an increasingly skeptical public.

By contrast, the rally sponsored by NYSRPA on March 20 attracted several thousand attendees from all across the state. Those concerned citizens gave up time from their families and their jobs to travel to Albany at their own expense to demonstrate their support for their civil rights.

"It is crystal clear where the public stands on the issue of gun rights in New York," said President Tom King. "They stand with NYSRPA and the NRA! It is high time for legislators to stop pretending and pandering to fringe elements pushing their anti-civil rights agenda in Albany."