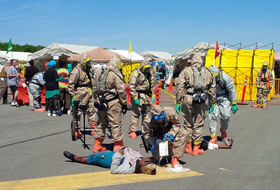 NEW YORK STATE PREPAREDNESS TRAINING CENTER, ORISKANY, N.Y. (09/05/2019) (readMedia)-- A regional disaster response force of more than 600 National Guardsmen and women from both New York and New Jersey will train here at the New York State Preparedness Center and at a state armory in Syracuse to rehearse their readiness to respond to Chemical, Biological, Radiological or Nuclear incidents September 6-8.

The New York National Guard's Homeland Response Force (HRF) is one of ten established by the Department of Defense to serve as a Chemical, Biological, Radiological and Nuclear (CBRN) Consequence Management Response force.

WHO: New York and New Jersey National Guard Soldiers and Airmen of the Homeland Response Force

Imagery of Soldiers wearing hazmat suits and training for casualty extraction and decontamination at a simulated incident site. For access to this training, contact New York Army National Guard Col. Richard Goldenberg at 518-727-7314.

The Homeland Response Force consists of about 570 Soldiers and Airmen of the National Guard with expertise in search and extraction of disaster victims, incident site security, decontamination, medical treatment and command and control of the mission.

The HRF is the focal point for increasing response flexibility and lifesaving efforts of local authorities after a CBRNE incident in the states supported by FEMA Region 2.

The core of each HRF is a CBRN capability augmented with additional command and control and security capability. This allows for the force to expand as an incident may require.

At the same time, these National Guard forces must be prepared to provide trained and ready troops to support overseas contingency operations as needed.

The training in September prepares a new HRF team for validation later this year. The units include:

• The 27th Infantry Brigade Combat Team Headquarters, based in Syracuse, N.Y. to provide command and control

• Decontamination Element personnel from the 642nd Support Battalion, based in Rochester, N.Y.

• Search and Extraction Element Soldiers from B Company, 152nd Brigade Engineer Battalion, based at Lockport, N.Y.

• A medical triage element from the Airman of the 105th Airlift Wing, based in Newburgh, N.Y.

• A Fatality Search and Recovery Team (FSRT) comprised of Airmen of the 107th Attack Wing, based in Niagara Falls, N.Y.

The HRF is designed to foster increased dialogue between regional first responders and other state and federal response agencies. The HRF plays an important role at the regional level in helping develop and build regional plans and in working with emergency managers to build a cohesive government response to CBRN incidents at the regional level.

The New York State Division of Homeland Security and Emergency Services established the training center in 2006. The facility, comprised of 723 acres at the former Oneida County Airport prepares traditional and non-traditional first responders to gain the knowledge, skills and abilities necessary to prevent, prepare for, respond to and recover from natural disasters or terrorist-related incidents.