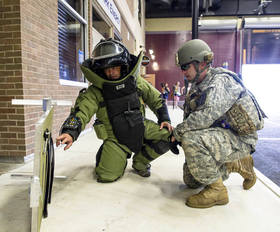 SCOTIA, N.Y. (10/16/2015)(readMedia)-- Lt. Col. Jason Souza, a veteran of the wars in Afghanistan and Iraq, will take command of the New York Army National Guard's 501st Ordnance Battalion, a headquarters unit that controls up to five explosive ordnance disposal companies, on Saturday, Oct. 17 during a ceremony at the Armed Forces Readiness Center in Scotia-Glenville.

Explosive ordnance disposal companies are key in fighting the IEDs that have been the enemy's primary weapon in Iraq and Afghanistan.

WHAT: A traditional Army Change-of-Command ceremony in which the battalion's a color, or flag, is transferred from Caliendo (the outgoing commander) to Freehart, the higher headquarters commander, to Souza, the incoming commander. The ceremony marks the transfer of authority and responsibility for the unit and was traditionally designed to allow the Soldiers to see who their new commander was. On the battlefield the unit's colors marked the location of the commander during the fight.

Members of the press will be able to interview the incoming and outgoing commanders. Video and photographic opportunities include Soldiers in formation and the flag transfer ceremony.

Lt. Col. Andrew Caliendo was commissioned a second lieutenant in the New York Army National Guard through the Empire State Military Academy Officer Candidate School (OCS) program in 1992 and assigned as a platoon leader in Company F, 42d Aviation Brigade. In September 1999, he was assigned as the personnel officer for the 642nd Aviation Support Battalion (ASB) in Brooklyn, NY. In July 2000, he was assigned as commander of the Headquarters and Supply Company (HSC) of the 642nd ASB in Brooklyn, NY.

As commander, he deployed to New York City with his company on September 11, 2001 in response to the 9/11 attacks. After over four years in command, he was assigned as the support operations officer (SPO) to the 642nd ASB where he mobilized and deployed to Iraq in 2004-05, serving as the unit executive officer after redeployment. In July 2006, he was transferred to the 42d ID Tactical Command Post (TAC) as the logistics operations officer, where he served until his current assignments as the 42nd ID Division Transportation Officer (DTO) and deputy officer in charge of the 42d ID Domestic All Hazards Response Team (DART) Coordination Cell (DCC).

A highlight of Caliendo's command of the 501st since 2012 was the employment this year of 60 EOD Soldiers training alongside 300 domestic and international EOD military and law enforcement personnel in Oriskany, New York for an exercise called Raven's Challenge at the New York State Preparedness Training Center in June.

In civilian life he is a quality manager at Sikorsky Aircraft in Stratford, Conn. He is a resident of Pelham, New York.

Lt. Col. Jason Souza was born in Southampton, New York and enlisted in the Army Reserve in November 1993. He received his officer's commission as a 2nd Lt. in 1998 from Marion Military Institute and served as a Tank Platoon Leader for Company D, 1st Battalion, 101st Cavalry in Newburgh New York. In June 2000 Souza went on active duty where he served in a variety of leadership and staff positions with explosives ordnance disposal, including command time as an EOD Company Commander and division chief of the Improvised Explosive Device Division and Air Ordnance Division. Returning to reserve status in 2010 Souza joined the Alabama National Guard as the Group Assistant Operations officer. Souza moved to the New York Army National Guard in 2011 where he served in the 501st EOD Battalion as the Battalion Operations Officer and the 53rd Troop Command as the Assistant Operations Officer.

Souza is the Director of Army Programs for the contracting firm PAE in his civilian career. He is from Fredericksburg, Virginia, and is married to Beth Souza. The couple have two children.