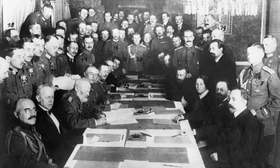 GERMANTOWN, NY (12/12/2019) (readMedia)-- Thirty New York Army National Guard Soldiers assigned to the 42nd Infantry Division Headquarters, based in Troy, N.Y., will attend a professional development lecture in Germantown on Friday, Dec. 13, to better prepare themselves for a deployment to the Middle East next year.

Dr. Sean McMeekin, author of "The Ottoman Endgame: War, Revolution, and the Making of the Modern Middle East" will discuss his researchc at 11:30 a.m. on Friday, December 13 at the Central House at 220 Main Street in Germantown, N.Y.

Senior leaders and division staff members will attend the program to learn more about the history of the Middle East and its impact on the current political and military environment.

The Central House was chosen as a venue because it was convenient for the speaker.

"The 42nd Division will be tasked to strengthen defense partnerships and to build partner capacity in this region," said Col. Sean Flynn, the division chief of staff.

"In order to employ our forces effectively, our leaders need to understand the environment. Dr. McMeekin's presentation will enhance our understanding of the region and its unique dynamics. Recent events in Syria demonstrate just how dynamic the region is," he said.

Ottoman Endgame is a retelling of twentieth-century history from the Ottoman perspective, delivering new insights into World War I and the contemporary Middle East, according to the publisher.

Between 1911 and 1922, a series of wars would engulf the Ottoman Empire and its successor states, in which the central conflict, of course, is World War I.

In his book, McMeekin calls these the "wars of the Ottoman succession." Few westerners know much about these conflicts.

The Ottoman Endgame brings to light the entire strategic narrative that led to an unstable new order in postwar Middle East-much of which is still felt today.

Professor McMeekin is a professor at Bard College and agreed to provide the lecture to the deploying Soldiers and other community members interested in the topic.

The program was developed through the efforts of New York Army National Guard Maj. John McBride, a staff officer preparing for mobilization in January with the headquarters.

"One of the main themes of the book is how shifts in allegiance have had long lasting impacts in the region," McBride explained.

"These themes have resurfaced in the present day. As Russia tries to replace the U.S. as a patron of Turkey, other regional actors have had to adapt to the changing dynamics. The lasting impacts of these changes will begin to emerge during our deployment, with many of these changes having roots in the treaties that ended World War I," he added.

McMeekin is also the author of July 1914: Countdown to War, The Russian Origins of the First World War, which won the Norman B. Tomlinson Jr. Book Prize and was nominated for the Lionel Gelber Prize; and The Berlin to Baghdad Express: The Ottoman Empire and Germany's Bid for World Power, 1898–1918, which won the Barbara Jelavich Book Prize; among other books.

McBride is available for further questions at 718-564-9720 or john.b.mcbride3.mil@mail.mil