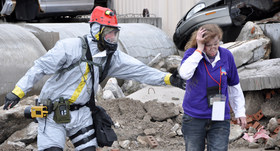 The exercise tested all the capabilities of the HRF, which is made up of National Guard Soldiers and Airmen from New York, New Jersey and Puerto Rico. In the days leading up to the final evaluation, HRF troops -- suited up in full protective suits, masks, boots and helmets -- located mock victims in a simulated disaster site, decontaminated them, treated their injuries and evacuated them for further treatment.

"Everyone trains in their lane and then they put all the pieces of the puzzle together properly, and we have this big machine that rolls on and accomplishes the mission," said New York Air National Guard Lt. Col Douglas Daeffler, the HRF deputy commander. "It's a beautiful thing when you see it all come together."

The HRF is composed of several specially-trained elements that are needed in a disaster: search and extraction, security, decontamination and medical. While these elements are drawn from New York, New Jersey and Puerto Rico Army and Air National Guard units, the command and control element is the 27th Infantry Brigade Combat Team (IBCT), based in Syracuse, N.Y.

To prepare for missions in a contaminated environment, the troops donned protective gear before they entered the simulated disaster area -- a monstrous amalgamation of junked vehicles, concrete slabs and culverts referred to here as the "rubble pile." The HRF assistance and support element, composed of troops from the New Jersey Army National Guard's 2nd Battalion, 113th Infantry, formed a security perimeter just near the disaster area to help prepare victims for decontamination.

Their mission was prevent people from crossing the line before they could safely process through decontamination and evaluation by medical troops, according to the 2-113th Infantry Soldier Sgt. Giovanni Toro, of Elizabeth, N.J. Their presence helps contain any potential hazardous material at the site of the incident.

Other mock victims -- made up with a vast array of simulated gruesome wounds and injuries -- emerged from the ruins and pressed the line, moaning and sometimes screaming for medical attention. Toro commended the role-players' acting abilities, and said they made the training more realistic.

"They were pretty rough," Toro said. "They were trying to push right through the line."

But the Garden State Soldiers held, controlling the line so troops could access the disaster area, move litter patients, decontaminate them and treat them. The troops tasked with decontamination are from the New York Army National Guard's Company D, 427th Brigade Support Battalion, the forward support company of the 2nd Squadron, 101st Cavalry, based in Buffalo, N.Y.

The training was something new for Staff Sgt. Michael Rider, of Lancaster, N.Y., who works as a machinist in his civilian capacity.

"This is my first time doing this type of training and I have been in the Guard ten years," Rider said.

The medical element of the HRF is comprised of New York Air National Guard troops from the 105th, 107th and 109th Airlift Wings, 106th Rescue Wing and the 174th Attack Wing.

"Our team includes physicians, nurses and (medical technicians)," said New York Air National Guard Lt. Col. Linda Rohatsch, the medical element commander. "When the patients get to us, they've already been decontaminated, and our job is to triage and stabilize them so we can return them to duty or send them out to a local hospital for definitive care."

The medical area was set up with an immediate care area as well as a minimal care area. Medics in the non-contaminated zone, or "cold zone" triaged patients and determined which area they will go to once they've arrived.

"We're set up to do anything they can do in an emergency room," said Rohatsch, who is from the 105th Airlift Wing.

This is her first experience with a HRF exercise, said Maj. Sharon Westbrook, 109th Medical Group.

"I am assigned to the minimal tent as a nurse," she said. "We get them bandaged up or if there are any eye irritations from the chemicals they were exposed to, we take them to the eye wash. We try and get them as stable as we can so we can get them out the door."

The training site, at the New York State Preparedness Training Center is located at the former Oneida Airport. Most of the training took place near the rubble pile in the vast open area of the former airport. Troops lived in a temporary tent city on the site, similar to the logistics base established for the Guard following their response to Superstorm Sandy in 2012.

During a week of rapidly shifting weather, troops endured high winds, frigid temperatures and rain. Due to the wind, some training was conducted in buildings on the site.

Some of the Airmen agreed that the flexibility they needed mirrored what may happen in the real world, and only made their training more realistic.

"We make do with what we have," Rohatsch said.

During the exercise, the HRF Soldiers and Airmen had some expert help from troops of the Joint Interagency Training and Education Center (JITEC). In addition to helping train the Region 2 HRF troops, the JITEC subject-matter experts evaluated their performance.

"Our job is to do the external evaluation," said Lt. Col. Scott Fuller, an officer with JITEC. "We go all over the country to do this for each of the HRF teams."

The successful evaluation means that the 27th IBCT takes over the mission from the New York Army National Guard's 42nd Infantry Division on May 3. The division has had the mission since its own validation in 2012. If needed, the Region 2 HRF responds to civil authorities request for support for disasters, primarily in New York or New Jersey, the two states within FEMA Region 2.

It's been a very good experience for everyone involved, Biehler commented before the end of the exercise.

"I feel good. I've learned a lot, and my Soldiers and Airmen learned a lot," he said. "The training brought us together working with first responders and the area commander and understanding how they operate and what their needs are. This has been a very good week. Everyone's really worked together to get the job done."

"This exercise will put us on the list to be first-to-call when a major event affects the state or our nation," he said.

Imagery of the validation exercise can be found at the New York National Guard Flickr site at http://www.flickr.com/photos/nyng/sets/72157644419973192/

Video of the training can be found at http://www.dvidshub.net/unit/NYNG