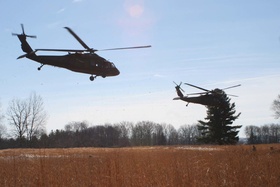 National Guard aircrews from the 3rd Battalion, 142nd Aviation depart a helicopter landing zone after a training mission to bring troops to the Saratoga National Battlefield in 2016.

SARATOGA NATIONAL HISTORIC PARK, STILLWATER, N.Y. (08/14/2019) (readMedia)-- Thirty-five New York Army National Guard leaders from across the state will participate in a battlefield tour and study of leadership at the site of the 1777 Revolutionary War Battle of Saratoga here Wednesday, August 14.

The participants will be delivered to the historic battlefield site on board four UH-60 Black Hawk helicopters. Members of the press are invited to cover the aircraft's arrival and the battlefield tour.

WHO: 35 New York Army National Guard Soldiers: Officers and non-commissioned officers attending a company command training course. Five of the Soldiers participating in the training this week hail from the Capital District.

WHAT: Helicopter air landing arrival for a staff analysis and tour of the Saratoga National Battlefield conducted by a retired park ranger who is an expert on the battle. The military traditionally refers to these battlefield visits as "staff rides" and uses them as a training tool.

Thirty-five officers and NCOs preparing to assume leadership or command positions across the New York National Guard will train in a variety of preparatory topics during August 12-16, 2019. The training prepares commanders and their senior NCOs, known as First Sergeants, to train, lead and prepare Citizen Soldiers for missions at home and abroad.

Training includes understanding unit readiness management for training, personnel and equipment, along with the information technology systems and resources to leverage to prepare units for domestic emergencies or overseas deployments.

The training for Wednesday, August 14 focuses on leadership lessons from the Battles of Saratoga in 1777.

The Saratoga National Historical Park preserves the site of the Battles of Saratoga, the first significant American military victory of the American Revolutionary War. Here in 1777, American forces met, defeated, and forced a major British army to surrender, an event which led France to recognize the independence of the United States, and enter the war as a decisive military ally of the struggling Americans.

First authorized as a New York state historic preserve in 1927 on the sesquicentennial of the Battles, the Battlefield was made part of the National Park System in 1938 when Saratoga National Historical Park was authorized by Congress.