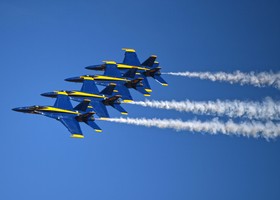 Members of the press are invited to cover this event.

Reporters will be able to interview:

-Sean McDermott and Blue Angel #7 after they land.

B-Roll to include take-off and landing of all Blue Angels aircraft during the event.

Members of the media who are interested in this event must contact Master Sgt. Brandy Fowler at 716-253-0071 and RSVP by Wednesday 11:00 am prior to the event in order to gain access to this secure military facility. Inquiries will be handled on a first come first serve basis and must include the news agency, name of reporter(s) and a contact number in case of changes.

The U.S. Navy Blue Angels jet demonstration team will be coming to Niagara Falls Air Reserve Station along with their C-130 J-model in celebration of their 75th Season as they prepare for their headlining of the Thunder on the Buffalo Waterfront Air Show in Buffalo, New York.

The Thunder on the Buffalo Waterfront Air Show will also showcase the Air Force's F-16 Viper Team, C-17 Demonstration Team, Canadian CF-18 Hornet Team, as well as other aerobatic performers and aircraft. The Waterfront Air Show replaces the Thunder of Niagara Air Show which was cancelled. There will be no air show events held at Niagara Falls Air Reserve Station.