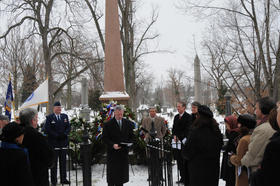 Col. Jim McCready, the vice commander of the 107th Airlift Wing, who is slated to take command of the wing from Col. Patrick Ginavan on January 22, will present a wreath from the White House during the annual ceremony conducted by the University at Buffalo.

Fillmore, the 13th President of the United States , was a co-founder of theUniversity at Buffalo's and the school's first chancellor. The university has conducted a memorial ceremony annually since 1937.

The United States Military honors former presidents by laying wreaths sent by the current president at their gravesites on the anniversary of their birth.

Some historians credit the former teacher, postmaster, lawyer and member of Congress with establishing the White House Library. During his administration the United States opened trade relations with Japan and California was admitted to the union. He died on March 8, 1874.

The annual ceremony will be held at 10 a.m. on Friday, January 7 at Fillmore's gravesite in Forest Lawn Cemetery here.

As members of the New York Air National Guard the men and women of the 107th Airlift Wing also stand ready to assist in state emergencies at the direction of Gov. Andrew M. Cuomo.