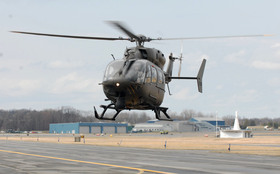 Eleven Soldiers of Detachment 2 of the 1st Battalion 224th Security and Support Battalion took part in the mission. Soldiers rotated through the mission for 45 days at a time with two pilots and two mechanics on duty.

The aircraft flew missions in support of the United States Department of Homeland Security's Customs and Border Protection and Immigration and Customs Enforcement agencies to assist monitoring the Arizona/Mexico border.

The National Guard aviators flew missions designed to stop the smuggling of drugs and illegal immigrants across the border.

Crews were accompanied by a Customs and Border Patrol agent on all missions. The agent had the ability to make arrests if necessary and also knows the area the crew will be patrolling.

With infrared camera capabilities and a high-powered searchlight, theUH-72 can easily track people on the ground and coordinate with Border Patrol agents.

The skills the aircrew learned on the border-- working with law enforcement and conducting air search operations-- can be employed in New York during disaster response missions.

This is not the first time New York National Guard troops have deployed to the border with Mexico.

In 2006-2008 more than 1,000 New York National Guard Soldiers deployed to the border as part of Operation Jump Start and New York aviators have supported Arizona and Texas aerial reconnaissance missions since 2012.

Nearly a century ago, in June 1916, the New York National Guard sent 17,000 members of the "New York Division" to Texas as part of an 110,000-member force mobilized by President Woodrow Wilson to prevent repeats of a raid on Brownsville Texas by the Mexican Revolutionary Poncho Villa. The Guardsmen served in Texas from July 1916 to February 1917.