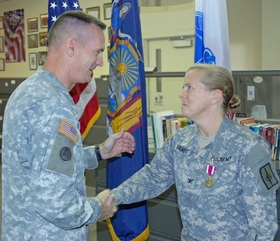 LATHAM, NY (10/07/2013)(readMedia)-- New York Army National Guard Col. Theresa VanCort, a Clifton Park resident and a veteran of the war in Afghanistan, has been picked to serve as deputy personnel officer for the 358,000-member Army National Guard.

VanCort, who has served for 32 years in the Army Reserve and Army National Guard, had been serving as the personnel officer for the 10,500-member New York Army National Guard. She was honored for her three years of service in that job on Friday, Oct. 4 when Major General Patrick Murphy, the Adjutant General of New York presented her with her second Meritorious Service Medal.

VanCort began her military service as an enlisted Soldier in the Army Reserve in 1981. She joined the New York Army National Guard in 1984 and was commissioned as a second lieutenant in the Adjutant General's Corps 1987.

VanCort has served in a variety of assignments in personnel management ranging from a personnel management section chief to Commander of the 4th Personnel Services Detachment and executive officer of the 56th Personnel Services Battalion. She also served as deputy Inspector General for the New York Army National Guard, and deployed to Afghanistan in 2008 as the Equal Opportunity Advisor/ Sexual Assault Response Coordinator for the 27th Infantry Brigade Combat Team.

In her new job VanCort will play a key role in setting personnel policy for the Army National Guard's of 50 states, three territories and the District of Columbia.

VanCort holds an Associates Degree in Accounting from Hudson Valley Community College, an a Bachelor's of Science from Excelsior College is also a graduate of the Army War College where she earned a Masters Degree in Strategic Studies.