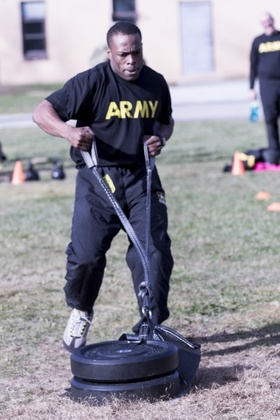 These standards become effective in 2020.

Battalion and Brigade commanders will walk through the six events which make up the new Army Combat Fitness Test with skilled instructors. Members of the press are invited to observe the training and discuss the new fitness program with New York Army National Guard leaders.

WHAT: Familiarization and training for the Army's new Army Combat Fitness Test (ACFT). The new test is designed to evaluate a Soldiers ability to meet the physical demands of combat,

The Army's fitness test is an annual requirement for all traditional National Guard Soldiers. The new tests goes from three events in the current Army Physical Fitness Test to six events in the ACFT. The six events are: • Strength Deadlift• Standing Power Throw• Hand-raised Push-ups• 250-meter Sprint, Drag and Carry• Leg Tuck• Two-mile RunThe increased number of events was strategically designed to test areas of physicality that are important in combat scenarios and that were not addressed in the older test. By the end of 2020, the six-event ACFT will replace the current three-event Army Physical Fitness Test first implemented in the 1980s.

The Army is conducting tests and evaluations of the new fitness test in 2019 with pilot units, including the New York Army National Guard's 3rd Battalion, 142nd Aviation Regiment, headquartered in Latham, N.Y. Battalion leaders received training and qualifications to administer the new fitness test. While individual events will not change, the pilot tests in 2019 will help the Army determine what scores and categories need to be adjusted and how best to apply the fitness test around the world in every Army component.