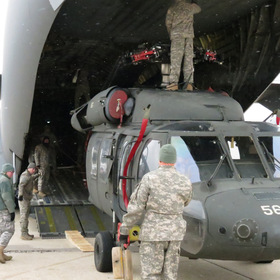 150 New York Army National Guard Soldiers from the Manhattan- based 1st Battalion 69th Infantry left for Puerto Rico today from Stewart Air National Guard Base in Newburgh and Joint Base McGuire-Dix-Lakehurst in New Jersey. They will return on Sunday.

The C-17s are flown by the 105th Airlift Wing at Stewart Air National Guard Base in Newburgh.

The Soldiers will be conducting tactical training at the Puerto Rico Army National Guard's Camp Santiago Training Facility. The training will focus on defense and offensive operations, integrated with air assault tactics employing the helicopters of the 3rd Battalion 142nd Aviation.

The Camp Santiago facility is being used for the training mission because the weather offers a better training climate in December and it allows the troops to practice moving and fighting in a tropical environment. Conducting training in Puerto Rico also allows the Soldiers to practice the logistical skills needed to deploy troops overseas.