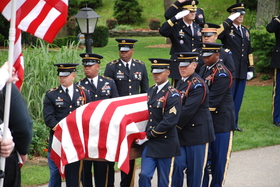 The bulk of these services-around 9,000-were at funerals of World War II veterans, Roy said.

The Honor Guard also provided services for eight Soldiers killed in action in Iraq and Afghanistan, including New York Army National Guard 1st Lt. Joseph Theinert, a Long Island native who was killed while serving in Afghanistan with the 10th Mountain Division. The number, unfortunately, goes up when major units of the New York Army National Guard are deployed, Roy said.

New York is second only to California-which does about 1,000 funerals weekly-in the number of services National Guard Honor Guard members participate in.

"Our Military Forces Honor Guard members exemplify the high standards of the Army and the New York National Guard," said Major General Patrick Murphy, the Adjutant General of New York. " Each of them considers it a privilege to provide this final salute recognizing the military service of our veterans."

For most of those funerals, the Honor Guard sends three members. Federal law requires that at least two Honor Guard members be present to fold and present a flag to family members of all former Soldiers when families request a military service. New York sends three whenever possible because three Soldiers can perform a more impressive service, Roy explained.

When only two Soldiers are present the flag-folded must be done beside the casket, he said.

When three Soldiers are present, one Soldier sounds Taps with an electronic bugle while the other two Soldiers make two folds of the flag above the former Soldier's casket. Then the third Soldier joins them in turning the flag into a triangle and ceremonially presenting it to the family, Roy explained.

"It makes a much nicer ceremony," he said.

Soldiers killed in action, general officers and retired general officers, retired sergeants major and Medal of Honor holders, are entitled to full military honors –21 Soldiers with a seven member firing party-at their funerals. Soldiers who die while in the service and retired Active Army, National Guard and Army Reserve Soldiers, are entitled to modified full honors, which entails a nine-member detail.

The Honor Guard performed 50 full honors services and 300 modified services in 2010, Roy said. The Honor Guard also assisted in returning the body of a World War II aviator, 1st Lt. Ray Fletcher, to his home in Essex Junction Vermont 66-years after he died in a crash on the Island of Corsica.

The New York Guardsmen provide services primarily for Soldiers and Army veterans but can step in to handle funerals for veterans of other services if requested, Roy said. New York's team was formed in 1999 and Roy, a retired Chief Warrant Officer, has been the director since 2003.

The Honor Guard maintains 42 M-14 rifles to use for firing parties, moving weapons around the state between offices when needed. Each office also has from two to 10 electronic bugles-bugles that allow a Soldier to put the bugle to his lips and play taps electronically-depending on how busy the office is. A live bugler costs too much, and not that many people can play taps well, Roy explained.

New York's Military Honor Guard is staffed with 68 Soldiers who are paid to be available for funerals on a daily basis. Another 70 Soldiers volunteer to come in when needed. The Honor Guard Soldiers, both full-time and part-time, are volunteers who continue to train with their Army National Guard units and most of the members have deployed into combat zones.

Total cost of the program is $5 million annually, Roy said.

About 20 percent of Honor Guard members are women and they meet the same standards as the men. It's sometimes tough for the women to manhandle the M-14 rifle-11 pounds and 46 inches long versus 7.8 pounds and 39 inches for the standard issue M-16-but they do it anyway, Roy said.

It takes about two weeks to train each Soldier to meet Honor Guard standards. The Soldiers learn the ins and outs of military funerals, how to maintain an immaculate dress blue uniform, and how to modify the drill and ceremony procedures they were taught in basic training to meet Arlington Standards, Roy said.

The movements practiced by Honor Guard members at Arlington National Cemetery are more stylized and exaggerated than the normal manual of arms or marching movements Soldiers are taught as recruits, Roy explained. It is all about putting on a good performance for the families.

"We aim to provide the same service they do at Arlington (National Cemetery) with all the honor and dignity the veterans deserve," Roy said.

This year a team of eight New York Honor Guard members, pulled together from several of the different Honor Guard regional offices, finished first in a Nationwide Honor Guard competition held by the National Guard Bureau at Fort Snelling, Minn.

"I think it says a lot about the program how well the Soldiers have adapted to be the best in the nation," Roy said. "They really work hard at this and every one of them deserves credit."

Funeral Directors must request honors on behalf of the family by contacting the New York National Guard Military Forces Honor Guard at the nearest office. Those numbers can be found here:

Requestors must fill out the DMNA Form 86 which can be downloaded and provide either forms DD214 or NGB 22 as proof of the military service and eligibility for honors by the deceased.