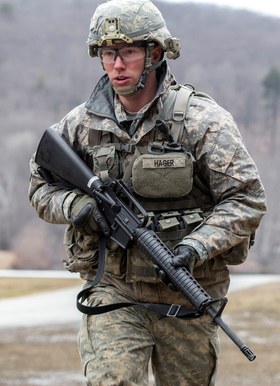 Specialist Michael Rowland, a personnel specialist assigned to the 501st Explosives Ordnance Disposal Battalion based in Glenville, was recognized as the best junior enlisted Soldier. He has served in the Army National Guard since July 2013.

Staff Sgt. Christian Hager, an infantry squad leader assigned to Company A, 2nd Battalion 108th Infantry, based in Geneseo, was selected as the top non-commissioned officer. Hager has served in the Army National Guard since 2008.

Twelve Soldiers-with six competing in each category-- took part in the competition which tested their physical fitness and military knowledge. Soldiers fired weapons, navigated with map and compass, demonstrated their ability to swim while in uniform, and participated in a grueling 6-mile forced march wearing full pack. Three women and nine men participated.

The competitors were selected through a series of competitions held at battalion and brigade level and represented all areas of the state and Army National Guard units.