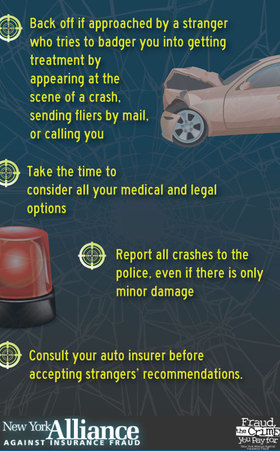 ALBANY, NY (03/07/2012)(readMedia)-- The recent takedown of the allegedly largest no-fault scheme in history is a pressing reminder of how fraud is plaguing New Yorkers across the state, warns the New York Alliance Against Insurance Fraud (NYAAIF).

"Crash gangs in Manhattan send a ripple that hits all N.Y. counties, raising everyone's premiums when they are most crunched by a downturned economy," says NYAAIF Chairman Jack Houston. "Shady clinics also harm motorist victims with dangerous and unnecessary procedures."

Consumers should be alert to a new fraud trend illustrated by the suspected gang's own tactics.

Fraudsters are contacting crash victims by mail, phone, or even at the scene of the accident. The stressed drivers are persuaded to get often substandard treatment at quack shacks that submit bogus injury claims.

Drivers can protect against getting targeted after crashes by following four common-sense steps:

• Back off if a stranger tries to badger you into getting treatment;

• Take the time to consider all your medical and legal options;

• Report all crashes to the police, even if there is only minor damage; and

Auto insurance in New York costs an average of $1,057, making it the fourth most expensive insurance state in the nation, says the Insurance Information Institute.

"Did all the crash victims in the recent scheme realize they were helping a fraud gang pick neighbors' pockets?" asks Jack Houston. "Crash victims can become unknowing accomplices."

Auto insurers in N.Y. pay almost twice as much in no-fault claims as they collect in premiums, says the Insurance Information Institute.

Critical to turning the corner on fraud is having enough resources for law enforcement and insurers to effectively strike back.

Legislation cracking down on fraud is also essential to the fraud fight. Proposed laws could make it a crime to recruit patients for bogus treatment.

Crash gangs are a festering problem that raises all New Yorker's premiums, says Jack Houston. How many similar schemes continue to thrive?

Consumers should be informed about the schemes to stop fraud in its tracks.

"After all it's the crime you pay for...everyday," says Jack Houston. "You've got to know it to stop it."