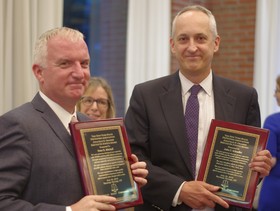 Ten years ago at the NYSDA Annual Conference, an innocuous-seeming item appeared on the agenda for a meeting of public defense office heads from around the state: "Discovery Reform (John Schoeffel)." Discussion about the need to revamp criminal procedure laws that essentially left the defense blindfolded were not new, but Schoeffel offered more than talk: LAS was proposing not just amendments to the existing discovery law, but, rather, a whole new statute, Criminal Procedure Law article 245. This year, article 245-with some changes from Schoeffel's original draft and a lot of advocacy work by many, including Schoeffel himself and NYSDA-became law. Schoeffel, a lawyer in LAS's Criminal Defense Practice, Special Litigation and Training Units, was on NYSDA's Annual Conference schedule again on Monday, this time to train hundreds of lawyers about the historic "2019 New York Criminal Discovery Reform."

Co-presenting with Schoeffel was Mitchell, the other Service of Justice awardee. He is LAS's Director of Training, Criminal Division, a position that would be daunting enough if meeting his in-house responsibilities were all that he does; the webpage about the Training Unit notes that LAS is the largest public defender organization in the nation. But Mitchell does much more, directing training events that provide Continuing Legal Education (CLE) for not only LAS staff but other lawyers, and presenting frequently for NYSDA and other organizations. Mitchell's assistance to NYSDA and the public defense community has helped not only lawyers in large institutional providers like LAS but also small county public defender offices and private attorneys, often solo practitioners, who act as assigned counsel. Helping this diverse group of public defense providers stay informed of best practices and new developments is crucial to NYSDA's mission of improving the quality and scope of public defense services; Mitchell has been invaluable in NYSDA's efforts. And he was also active in the discovery reform movement.

NYSDA's Executive Director Susan Bryant noted that Mitchell and Schoeffel "are each, in their own right, deserving of the Service of Justice Award. But they are also deserving for their joint and intersecting contributions, as described on each of their plaques: 'For your generous sharing of your expertise with NYSDA and the public defense community through exceptional training presentations, reference materials, and practice resources.'"

Mitchell's plaque read in addition: "For your commitment to superior training of public defense attorneys and investigators from around the state."

Schoeffel's included this: "For your steadfast efforts to achieve discovery reform in New York." NYSDA is not alone in recognizing Schoeffel's contributions to reform; the National Legal Aid and Defender Association awarded him its 2019 Kutak-Dodds Defender Prize.

The Jonathan E. Gradess Service of Justice Award is named for NYSDA's former Executive Director, who retired in 2017. It commends individuals or organizations that have provided outstanding support to public defense and to NYSDA.