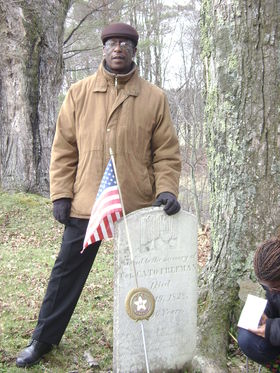 SARATOGA SPRINGS, NY (02/21/2014)(readMedia)-- The New York State Military Museum will mark Black History Month with a special program on the African- American Soldiers who fought for the Union in the Civil War on Saturday Feb. 22.

WHO: Harry Bradshaw Matthews, Associate Dean at Hartwick College in Oneonta, and a historian of the African-American experience.

WHAT: The talk –"The Role of the United States Colored Troops in the African-American Freedom Journey"-will discuss the history and service of these Soldiers. More than 4,000 New Yorkers served in United States Colored Troops regiments during the Civil War. The presentation is sponsored by the Friends of the New York State Military Museum, a non-profit which helps raise money for the museum, is free.

"More than 4,000 African Americans from New York volunteered for service in the United States Colored Troops and thousands more from other states, yet their role in the Civil War is often overlooked," said Courtney Burns, director of the New York State Military Museum. "Harry Matthews' lecture will be a great opportunity to learn about the contributions of these soldiers and the impact their service had on African Americans' long struggle for freedom and equality. "

Matthews and the United States Colored Troops Institute have been honored with numerous proclamations and awards for research, preservation, and remembrance of the USCT. Recognitions included selection as a keynote speaker at the 145th Anniversary Commemorative of the USCT Grand Review in Harrisburg, PA, profile in the December 2009 issue of Perspectives on History published by the American Historical Association, the 2008 endorsement by the United States Abraham Lincoln Bicentennial Commission, the 2004 Jeffries Carey National Achievement Medal, the Senate of Maryland Resolution 423 for outstanding historical and genealogical research, the 2003 Congressional Black Caucus Veterans Braintrust Award, and the 1998 proclamation from New York State Governor George Pataki honoring the United States Colored Troops from the Empire State.

He is the curator of the privately-owned Matthews Collection for the Preservation of Freedom Journey Classics that is comprised of 2,500 items consisting primarily of first edition publications about the anti-slavery movement and the military involvement of African Americans and their white officers from the mid-1700s through World War II.

Matthews has traced his family lineage back to 1762. He is the author of several books, including The Family Legacy of Anthony Johnson: From Jamestown, VA to Somerset, MD, 1619-1995: AMulti-racial Saga in Black, Red and White, the Negro Johnson and Indian Puckham Lineage, and African American Genealogical Research: How to Trace Your Family History; and African American Freedom Journey in New York and Related Sites, 1823-1870, which includes references to the 20th and the 26th United States Colored Troops that were organized in New York State.

Finally, Matthews is also the author of Whence They Came: The Families of the United States Colored Troops in Gettysburg, Pennsylvania, 1815-1995.