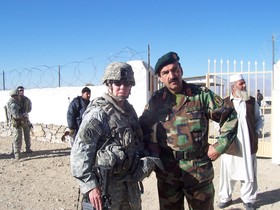 WHO: Lieutenant Colonel David Dunkle relinquishes command to Major Henry Pettit with more than 100 troopers of the squadron in attendance.

WHAT: Change of Command ceremony for the 2nd Squadron, 101st Cavalry (Reconnaissance, Surveillance and Target Acquisition).

News media will be able to interview the troopers and leaders of the 2-101 Cavalry as part of the change of command ceremony. Visuals include the passing of the unit colors from the current to new squadron commander.

Pettit served initially as a scout platoon and anti-tank platoon leader with the 1st Battalion, 105th Infantry before entering the Active Guard and Reserve Program in 1996. He has held a number of staff and leadership positions in his 16 years of commissioned service, including battalion personnel officer, logistics officer and rifle company commander with the 105th Infantry, Officer Strength Manager, Area Officer in Charge and Executive Officer of the New York Army National Guard Recruiting and Retention Command, Deputy Personnel Officer with the 42nd Infantry Division Headquarters and Executive Officer of the 106th Regional Training Institute.

Pettit is a graduate of the Infantry Officer Basic and Advanced Course, the Combined Arms and Services Staff School, the Pathfinder Course and the Command and General Staff Common Core and Pre-Command Courses.

New York Army National Guard Lt. Col. David Dunkle was born and raised in Buffalo, N.Y. and is a graduate of Canisius College with a Bachelor of Science Degree in Finance.

Dunkle deployed in 2008 as the Security Force Battalion Commander in support of Combined Joint Task Force Phoenix in Afghanistan. Dunkle previously deployed in 2004 as part of the 42nd Infantry Division Headquarters and Task Force Liberty in Tikrit, Iraq for Operation Iraqi Freedom.

Dunkle is currently employed as a Supervisor by the United States Citizenship and Immigration Service (USCIS) and lives in Lancaster, N.Y. with his wife Susan and two sons, Ian and Colin.

Lieutenant Colonel David Dunkle assumed command of the reconnaissance squadron on June 1, 2006. The squadron and the 1-69th Infantry Battalion's scout platoon deployed six months later, in January 2007 to the US/Mexican border in support of Operation Jump Start, the homeland security augmentation to the US Customs and Border Enforcement Agency. During that time we manned checkpoints in Ojo, Sasabe and Nogalas in Arizona.

The 2-101 Cavalry Squadron mobilized in January 2008 and conducted predeployment training at Fort Bragg, N.C. and arrived in Afghanistan in March, 2008.

During the squadron's deployment, the cavalry troopers conducted security operations and mentored Afghan National Army and National Police forces throughout Afghanistan. The unit experienced seven troopers killed in action during the deployment and one additional Soldier who died during his recovery at Fort Bragg.

The squadron re-deployed from Afghanistan in late December 2008 and demobilized from Fort Bragg in January 2009.

Following reintegration events and reorganization back to the traditional reconnaissance, surveillance and target acquisition squadron in the spring of 2009, the unit conducted their first cavalry spur ride in August 2009, awarding 15 troopers their coveted cavalry spurs for demonstrated excellence in their reconnaissance mission.