Traditional Cake-Cutting Ceremony Will Be Held at Guard Headquarters 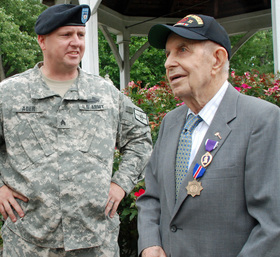 LATHAM, NY (12/13/2010)(readMedia)-- A 92-year old New York National Guard veteran of World War II will join a 19-year old Guardsman in a traditional military cake-cutting ceremony at Division of Military and Naval Affairs Headquarters this morning to mark the 374th birthday of the National Guard.

Traditionally the oldest military member present joins the youngest in cutting the cake with ceremonial saber. John Sidur, a veteran of the 27th Infantry Division from Loudonville who fought on Okinawa, and PFC George Wade from Niskayuna will do the honors at the event being held at 11:30 a.m.

Two other World War II veterans of the New York Army National Guard who fought with the 27th Division in the Pacific-- Spike Mailloux, age 87 and John Trudeau, age 89-plan to be present.

The National Guard, a force composed mostly of part-time Citizen Soldiers, traces its birthday back to Dec. 13 1636 when the General Court of the Massachusetts Bay Coloney passed a law establishing formal militia companies in the colony. These companies were made up of all adult males older than 16 and were expected to meet and train in military skills regularly.

In New York the first citizen-soldiers were members of the Burgher Guard, organized by the Dutch East Indian Company in1640 to help protect New Amsterdam from their English neighbors in Massachusetts and Virginia or from hostile natives.

New York gave the country the term National Guard for its militia forces when the 7th Regiment of the New York Militia renamed themselves the National Guard to honor the Marquis de Lafayette, a hero of the American Revolutionary War who had commanded a force called the "Guard de National" in the early days of the French Revolution.

Citizen soldiers of the militia and National Guard have fought in all of America's wars from King Philips War against Native Americans in the New England Colonies in 1675 to the struggle in Afghanistan today.

Currently more than 1,000 members of the New York Army and Air National Guard are serving in Iraq, Afghanistan and other locations around the world while more than 200 Soldiers and Airmen are on State Active Duty performing a security mission in New York City.

Members of the media interested in covering this event should contact the Division of Military and Naval Affairs Public Affairs Office at 518-786-4581 for access to this secure facility.