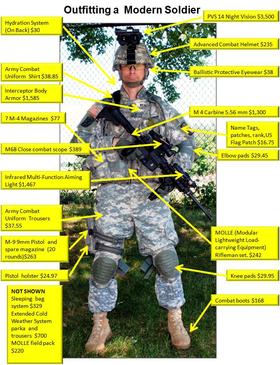 While his load of equipment and weaponry weighed only slightly for the Civil War Soldier, he would not recognize much more than the bayonet of today's modern infantryman.

To highlight the difference in the equipment a Citizen Soldier of 2011 carries, versus a volunteer of 1861 such as those who fought at Bull Run 150 years ago, the New York National Guard invited the media to see what a Soldier of 2011 wears into battle versus a Soldier of 1861 at New York State Division of Military and Naval Affairs Headquarters on Wednesday, July 20.

New York and the First Battle of Bull Run:

Fought on July 21 1861, the 1st Battle of Bull Run (there was a second clash in the same area in 1862) was the first major battle of the Civil War and a victory for the Confederate Army led by Brig. Gen. Pierre Gustave Toutant Beauregard and a defeat for the Union Army led by Brig. Gen. Irvin McDowell. But the battle, fought near Manassas, Virginia, could just as easily have gone the other way.

Both armies were composed of newly recruited, inexperienced and partially trained Soldiers. The outcome looked like a Union victory until Confederate reinforcements led by Brig. Gen. Joseph Johnston showed up in time to swing the outcome of the battle towards the South.

The New York State Militia, the force that was later renamed the New York National Guard, played a significant role in the battle. The state of New York sent just over 8,500 militia members to Washington for three months of federal service following the start of the Civil War in April 1861. Most of those Soldiers served at the Battle of Bull Run.

Eight New York militia regiments –the 13th, 69th, 79th, 8th, 14th. and 71st- took part in the battle. The commander of the 69th New York State Militia, Col. Michael Corcoran, was taken prisoner during two charges at a Confederate artillery battery. Besides their colonel and second-in-command, the 69th sustained losses of 41 officers and men killed, 85 wounded and 60 prisoners. The 79th New York State Militia Regiment alone lost 198 men, 115 of them captured or missing.

Another twelve New York Volunteer Infantry Regiments, manned with Soldiers who had agreed to serve for two or three years, also took part in the battle.

Each regiment consisted of about 600 to 800 Soldiers.

By the time of the Battle of Bull Run, New York had sent 46,000 militia members and volunteer Soldiers into the Union Army and allocated more than $500,000 to equip them.

Although the battle was a defeat for the Union cause, it convinced the North that the war would be a long one and that they needed to prepare for an extended war. New York State immediately began raising volunteer units to fill a call for a million-man Union Army and by the end of 1861 more than 100,000 New Yorkers-one in six of every man of military age-was serving

Equipment of the Civil War Soldier of 1861

It cost $42 to equip a Union Soldier for battle in 1861. In 1861 A New York State Militia Soldier might be wearing the militia grey uniform his outfit had issued before the war or he may have been wearing an Army-issued blue coat and blue pants.

Some New York units which decided to designate themselves as "Zouave" units wore red baggy pants like those of the native North African Troops that served the French Army . He wore ankle high black leather shoes. Soldiers wore a cap with a leather rim to keep out sun and rain known later as a forage cap.

He was equipped with an 1861 Springfield rifled musket that fired a 58 caliber soft lead bullet called a "Minie ball." The musket was loaded with black powder contained in a paper cartridge that the soldier bit open and then poured into the barrel. The Soldier then rammed the bullet into the barrel, seating it on the powder. A cooper percussion cap filled with fulminate of mercury was placed on a nipple at the end of the barrel and when he pulled the trigger a hammer striking the cap caused an explosion firing the musket.

A well trained Soldier could fire three rounds a minute. The rifled musket was accurate out to about 300 yards. This was a vast improvement over smooth bore muskets of prior wars and required a change in the way wars were fought. The rifled musket weight about 10 pounds.

Soldiers wore issued bayonets that fit on the end of the musket to allow it to be used in close combat. Although generals always envisioned bayonet charges of massed ranks, most Civil War battles consisted of Soldiers firing at each other until one side had enough and ran. Most bayonets were used as candle holders.

Soldiers were issued oiled leather cartridge boxes that contained 40 cartridges. A cartridge was a paper cylinder that contained a measure of powder and a Minie ball. The Soldier bit off the end of the cartridge with the Minie ball and held it in his mouth. He poured the powder in and then spit the bullet into the gun, to be rammed into the barrel. He might carry another 20 to 40 rounds in his knapsack.

The Soldier carried a canteen made of tin stopped with a cork. He carried his rations -dried meat, vegetables and a biscuit called hardtack- in a pouch slung over his shoulder called a haversack made of tarred canvas. He was issued leather or painted canvass knapsack to carry his plate and utensils, extra socks and group gear like a coffee pot or frying pan.

Soldiers were issued wool blankets to sleep under and a rubber blanket, or cloth, to wrap around the wool blankets and use as a ground clothe. He was also issued a greatcoat of wool to keep him warm in cold weather or dry in the rain.

A Union Soldier would normally carry between 45 and 55 pounds of equipment.

Equipment of the New York National Guard Soldier of Today.

The New York Army National Guard Soldier of today wears a plethora of equipment designed to protect him or her from injury and allow them to engage the enemy with accuracy and lethality both during the day and at night. Total cost to equip a Soldier is about $18,088 in 2011 dollars according to the Army's Project Executive Office Soldier, the entity charged with equipping a ground combat Soldier.

The Soldier's combat uniform is designed to be fire resistant. It's a form fitting shirt worn under Interceptor Body Armor or an Improved Outer Tactical Vest (another type of body armor), and costs $101.19. The Soldiers trousers, also designed to be fire resistant cost $66.17. The Body Armor, designed to protect against fragmentation wounds and direct fire from an AK-47 (when special ceramic plates are inserted) costs $2,236 when all options for protection-included specific side protection and neck and groin protection-- are worn. Soldiers deployed to Afghanistan get equipment issued in a special camouflage pattern called "Multi-Cam" which is designed to make them harder to see in the hills and valleys of that country.

Soldiers carry the M-4 carbine, a weapon based on the Vietnam-war era M-16. The M-4 6.36 pounds (four less than the Civil War weapon), holds 30 rounds in its magazine and can be fired on semi-automatic (a round fires each time the trigger is pulled) or in burst mode (each trigger pull sends three bullets downrange). The weapon 's effective range is 500 meters for point targets. In combat the M-4 is usually equipped with an M68 Close Combat Optic which allows a Soldier to aim by placing a red dot generated in the sight on a target.

A Soldier normally carries seven magazines of 30 rounds. The magazines are reused.

The basic M-4 costs $1,300. The M-68 Optic costs another $389. An infrared multi-function aiming light costs $1,467 can be attached to the weapon to allow for accurate firing at night when the Soldier is employing his or her PVS-14 monocular night vision device ( cost $3,500) to see with.

Soldiers usually wear kneepads and elbow pads to protect themselves in urban environments and rocky ground, as well as the Advanced Combat Helmet (cost $235) that provide protection from fragmentation, some small arms fire, and the bumps and bruises of moving quickly. Soldiers are also issued specialized earplugs to protect their hearing from weapons fire and explosions and ballistic protective eye wear that act as both sunglasses and fragmentation protection.

Soldiers are issued a first aid kit, and a MOLLE (Modular Lightweight Load- carrying Equipment ) set which includes an assault pack, a waist pack a hydration system (Camelback or similar system), Canteen pouches, magazine pouch, and entrenching tool. They can also carry a MOLLE backpack and a weapons light (a high intensity flashlight that fits on a weapon). Some Soldiers, depending on their job, are also issued an M-9 9mm pistol and three magazines of ammunition. The pistol is carried in a thigh holster or a side holster.

Soldiers are issued a lightweight one-man tent which can be carried on operations, a sleeping bag that can be configured for warm or cold climates, and a lightweight sleeping pad.

What a Soldier carries depends on his or her job and the mission requirements. Along with personal gear,

Soldiers operating on foot carry addition ammunition for the company mortars and machine guns and extra radio batteries. In Afghanistan infantry Soldiers can carry a average fighting load of 62 pounds.