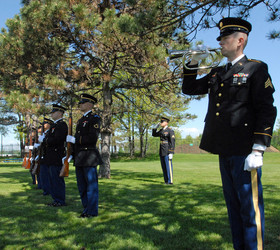 LATHAM, N.Y. (05/20/2015)(readMedia)-- The New York State Division of Military and Naval Affairs (DMNA) and the New York National Guard will mark Memorial Day with a ceremony and dedication of the New York Military Forces Memorial at state headquarters on Thursday, May 21.

WHO: The state and federal civilian employees and military personnel of the Joint Forces Headquarters-New York and the Division of Military and Naval Affairs.

WHAT: The Division of Military and Naval Affairs headquarters will hold a brief pre-Memorial Day ceremony honoring military members who have made the ultimate sacrifice to their country, including a wreath placement at the military forces memorial and playing of taps.

The New York Military Forces Honor Guard will play taps and fire a 21-gun salute as part of the ceremony. Major General Patrick Murphy, the Adjutant General of New York, and Vietnam Veteran Ray Sestak of Albany will deliver brief remarks to the Soldiers and Airmen of the New York National Guard and civilian employees of the New York State Division of Military and Naval Affairs who participate in the event.

Members of the media interested in attending to cover the event should contact the Division of Military and Naval Affairs Public Affairs Office at (518) 786-4581 no later than 9 a.m. on May 21 for access to this secure military facility

Memorial Day originated in Waterloo, New York in May 1866 as a way to mark the sacrifice made by local soldiers who died during the Civil War. In 1868 the observance was endorsed by the Grand Army of the Republic-the main Union veterans organization of the time-- and became a national event.

Since 2001 there have been 590 military members who called New York their home, or who were stationed in New York, mostly at Fort Drum in Jefferson County, who have fallen in battle in Afghanistan or Iraq. Of those military members, 33 belonged to the New York Army National Guard and one Marine Corps Reservist was also a member of the New York Naval Militia.

Sergeant Heath McMillin of Canandaigua, assigned to the 105th Military Police Company, became the New York National Guard's first combat loss since the Korean War, July 27, 2003, when he was killed in Iraq by an improvised explosive device.

New York Air National Guard Staff Sgt. Todd J. Lobraico, Jr. from New Fairfield, Conn., assigned to the 105th Security Forces Squadron at Stewart Air National Guard Base in Newburgh, N.Y. is the most recent National Guard loss when he was killed in combat with Taliban forces in Afghanistan September 5, 2013.

Nearly 9,000 members of the New York Army National Guard have been mobilized and deployed for service in Iraq or Afghanistan in the wake of the terrorist attacks of 9/11. A total of 33 Soldiers or Airmen have lost their lives as a result of combat operations, accidents or other causes while serving overseas.

The New York National Guard will also honor and remember 18 members from across the state who passed away over the last year.

The Division of Military and Naval Affairs began holding pre-Memorial Day programs at its headquarters in May 2005 to remind the community of the purpose of the Memorial Day holiday and that New York Soldiers were serving and falling in combat on behalf of the nation.

Originally from Cleveland, Ohio, Ray Sestak served in the United States Air Force from 1967-71, flying combat reconnaissance missions in Vietnam with the 553rd Reconnaissance Wing in 1969-70. Making a career in Albany, he retired from New York State service as Chief Information Officer for the New York Lottery in 2008.

Ray is a Life Member and Vice President of the Capital District Chapter 8 of the Vietnam Veterans of America and Life Member of the Veterans of Foreign Wars, Waterford Post 5800.

In his years since leaving state service in 2008, he has dedicated himself to serving the veterans community.

He has worked with the Albany Homeless Veteran annual stand down as a committee member, a driver and transportation coordinator.

He also worked on a national committee of 4-5 individuals that helped track down family members to retrieve DNA samples for final identification of remains of from WWII and Korean War service members.

Ray's additional volunteer activities include serving as a ride captain with the Patriot Guard Riders. In this capacity, Ray coordinates and leads motorcycle escorts for Veteran funerals and supports the departures of veterans participating in the Honor Flight Network of flights for veterans to their memorials in Washington.

The Division of Military and Naval Affairs dedicates the New York Military Forces Memorial during this year's remembrance ceremony. The memorial depicts an inverted rifle and bayonet with helmet displayed inside a pair of combat boots, most often referred to as a battlefield cross.

The origins of the battlefield cross are vague, but appear to lie in the American Civil War. During the Civil War Soldiers were often sent home for burial or buried in an area designed to be a cemetery near the recent battle. After a battle, people would mark the bodies which needed to be recovered and the most convenient marker was a Soldier's rifle with its bayonet stuck into the ground with his hat placed on top.

During World War II, as units rapidly advanced, Soldiers and Marines would often bury the bodies of their fallen comrades in shallow graves. Once again placing a rifle with bayonet fixed into the ground and a helmet on top to indicate the remains. Over time, this image came to be associated with military loss.

Although the battlefield cross itself is not an official military honor, it does play a part in the memorial ceremony as a visible reminder of the fallen Soldier.

The helmet and identification tags signify the fallen Soldier, their name never to be forgotten. The inverted rifle with bayonet signals a time for prayer, a break in the action to pay tribute to our friend. The combat boots, worn and dirty, represents the final march of the soldier's last battle.