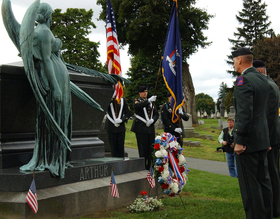 MENANDS, NY (10/04/2010)(readMedia)-- The New York National Guard will honor Chester A. Arthur, the 21st President of the United States with a formal wreath laying on his grave at Albany Rural Cemetery on Monday, Oct.5, the 181st anniversary of his birth.

Visual opportunities will include the formal wreath –laying ceremony, and the presentation of the colors by a New York National Guard Color Guard. Brig Gen. Payne will deliver a few brief remarks and there will be an opportunity to interview him.

Chester Arthur, a former school teacher in nearby Vermont, a lawyer, a Republican politician and a member of the New York National Guard, became president on Sept. 19, 1881 when President James Garfield died from a bullet wound suffered at the hands of an assassin on July 2, 1881. Born in Vermont, Arthur attended Union College in Schenectady for both his bachelors and advanced degrees and lived in Hoosick, New York. He worked as a lawyer and was active in Republican politics and also served as the Judge Advocate General of the New York National Guard, then known as the militia. In this capacity he drafted a military law which restructured the organization.

During the Civil War he was appointed Quartermaster General of New York and was responsible for equipping and transporting 70 New York Volunteer Regiments, about 70,000 Soldiers, during his two years on the job. From 1871 to 1878 he was the chief Customs Inspector in New York City and the leader of the "Stalwart" wing of the Republican Party. He was elected vice president during the election of 1880.

During his time in office he promoted the first federal Civil Service Law, oversaw the implementation of the first law governing immigration, and organized an international conference to that set the prime meridian-used for determining a place on earth and for time keeping-as running through Greenwich, England. Arthur, who had been in poor health during the later part of his term, died on Nov. 19, 1886 of a cerebral hemorrhage less than a year after leaving office, and is buried next to his wife Ellen who died of pneumonia in 1880.