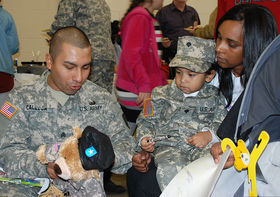 Sgt. Joseph Calleja, from 727th Military Police (Law and Order) Detachment, presents his 2-year-old son Joseph Jr., center, and his wife Yahaira, right, with a toy during his 2011 deployment ceremony.

WHAT: Farewell ceremony for Soldiers and families of the 727th Military Police Law and Order Detachment.

WHO: 22 Soldiers and their family members

For access to this secure military facility, news media must contact Sgt. 1st Class Mayana S. Alexander, (914) 944-6573 prior to 9 am on Sunday, March 26. News media representatives should be prepared to show proper identification at the Camp Smith main entrance.

The Military Police Detachment provides specially trained staff and Soldiers to operate law enforcement operations in a deployed environment. The Soldiers will depart New York next week for predeployment training at Fort Bliss, Texas. The unit is expected to return for service in Afghanistan in one year.

Members of the 727th Military Police Detachment last served in Afghanistan in 2011-12, when 42 Soldiers deployed to provide law enforcement support on U.S. and coalition bases. They returned home from that mission in November, 2012 after a one-year timeframe.

The 727th Military Police Detachment previously deployed before that in 2006-07 when it served successfully in Iraq for 15 months. The Soldiers served at the Victory Base Complex in Baghdad.

The law and order unit operated the Military Police station and Provost Marshal's Office at Camp Victory as well as providing military police Soldiers to support other Multi-National Corps Missions.