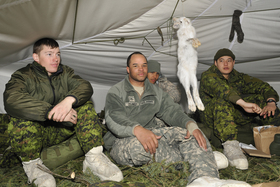 New York Army National Guard Soldiers of the 1st Battalion 69th Infantry (center) share a shelter, and a rabbit caught in a snare, with Canadian Soldiers during survival training in Canadia in 2010

CORTLANDT MANOR , NY (11/21/2011)(readMedia)-- Six New York Army National Guard officers and non-commissioned officers based at the Camp Smith Training Site will be heading for Canada after Thanksgiving to take part in a Canadian military exercise.

The six Soldiers, who are assigned to the headquarters of the 53rd Troop Command, will portray the commander and staff of an American Army brigade as part of a Canadian Forces command post exercise being held at Canadian Forces Base Petawawa in Petawawa , Ontario.

The exercise being conducted by the Canadian Army's 2nd Canadian Mechanized Brigade Group, will test the ability of the brigade's commanders and staff officers and non-commissioned officers, to make the kind of decisions they would make in a combat environment. The combat takes place inside a computer simulator.

The United States Army has conducted this kind of training, known as Warfighter Exercises, since the late 1980s.

The scenario calls for the 2nd Canadian Mechanized Brigade Group to fight as part of an international force which includes a British Brigade and the 1st Stryker Brigade, an American unit equipped with the wheeled Stryker Combat Vehicle. The role of the New York National Guard Soldiers will be to roll-play the part of the 1st Stryker Brigade's commander and key officers.

When Canadian Soldiers need to talk to the commander of the American brigade, Col. Ron Ridner, the chief of Staff of the 53rd Troop Command, will pick up the phone and respond. The other New York National Guard Soldiers will portray other roles, generate message traffic, and attend meetings as needed.

Taking part in this Canadian exercise is a great way to learn how another Army does business as well as brush up on their own knowledge of combat operations, said Major Hank Padley, the 53rd Troop Command's operations officer.

Like the U.S. Army, the Canadian Army has been focusing on low-intensity combat operations during the past decade, Padley said. These types of actions usually involve patience instead of quick decision making.

This exercise will give their leaders and staff soldiers a chance to relearn the skills involved in high-speed, high-intensity operations, Padley said.