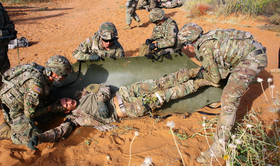 Many of the 220 Soldiers who are part of the team are assigned to the 2nd Squadron 101st Cavalry which is headquartered at the Niagara Falls Air Reserve Station in Niagara Falls, N.Y. The squadron also has troops in Jamestown, Geneva, and Buffalo.

The other members come from elements of the 27th Infantry Brigade Combat Team which is headquartered in Syracuse and has units across New York. The unit is designated as the 27th Brigade (Forward).

The New York Guardsmen arrived in Ukraine on Nov. 11 and spent the last two weeks conducting a transition with the Oklahoma Soldiers.

The New York National Guard Soldiers will be part of the Joint Multinational Training Group-Ukraine (JMTG-U). Troops from Canada, Denmark, Lithuania, Poland and the United Kingdom are also part of the training mission.

"Having the opportunity to train with and mentor Ukrainian Soldiers who are concurrently fighting on the eastern border of their country for freedom has a significant effect on how well we need to do this mission," said Col. Dennis Deeley, the commander of the New York National Guard Training Team.

"The 27th Brigade (Forward) is prepared and will carry on the strong success of Joint Multi-National Training Group Ukraine. We will work with all our friends, Allies, and Partners from free nations, to improve Ukrainian capability to oppose oppression," Deeley said.

The New York-based 27th Brigade team will spend about nine months in Ukraine, helping the Ukrainian Ministry of Defense further develop its Combat Training and advise on its training program being conducted there. Oklahoma's 45th Brigade has been at the Yavoriv Combat Training Center since January 2016, conducting the same mission.

"We're all extremely well-trained - both in the military and the civilian side - and we're going to bring that skill set to JMTG-U and help the Ukrainians become better and more interoperable with the NATO forces," said Command Sgt. Major Thomas Ciampolillo, the senior enlisted soldier for the 27th Brigade.