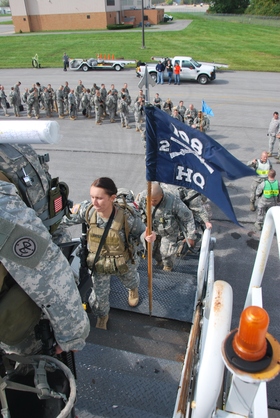 Soldiers of the 2nd Battalion 108th Infantry, headquartered in Utica, board a plane at Hancock Field Air National Guard Base on Sept. 30 (Photo by Master Sgt. Peter Towse)

The bulk of the Soldiers come from the 27th Infantry Brigade Combat Team which is headquartered in Syracuse and has elements across New York.

The Soldiers will train at Fort Irwin as part of the unit's preparations for mobilization and deployment to Afghanistan in early 2012. About 1500 of the Soldiers are currently scheduled to deploy. The other Soldiers will support their training.

The Soldiers participating in the training come from armories across western New York, the Hudson Valley, the Utica area, and Long Island and New York City. The soldiers were moved to Hancock Field by bus and then boarded 13 charter flights that left throughout the day.

A small contingent that will provide support to the training units comes from the 42nd Infantry Division Headquarters in Troy and National Guard Joint Forces Headquarters in Latham.

The training, conducted at the NTC through late October, will provide Soldiers from the brigade, along with a battalion from the South Carolina Army National Guard, with a realistic, demanding training environment. The exercise will stress leaders, Soldiers and staffs in a simulated combat environment.

The NTC trains units by conducting force-on-force and live-fire training across the spectrum of conflict, using a live-virtual-constructive training model. The National Guard Soldiers will confront a highly lethal and capable Opposing Force and the entire exercise will be controlled by an expert and experienced Operations Group.

The NTC maneuver area has multiple urban operations sites and portrays the complexity and human dimension of the modern battlefield.