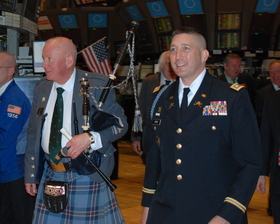 The regiment mobilized for service in the American Civil War in April 1861, serving in the First Battle of Bull Run through the summer. The regiment returned to New York, only to see many of its members again muster as part of the 69th Volunteer Infantry Regiment. The unit, part of the famed Irish Brigade, would go on to serve in numerous campaigns in 1862 and serve through the end of the war.

The battalion concludes the annual parade celebration with awards and honors at the battalion headquarters at the New York State Armory on Lexington Avenue.

The battalion will host military leaders to present awards to the unit Soldiers of the Year.

Joining the battalion this year will be Phil Taylor, artist for the American Fallen Soldiers Project, presenting a portrait of one of the unit members killed in the war in Iraq in 2005, Sgt. Kenneth VonRonn.

VonRonn, 20, of Bloomingburg, New York, was a combat medic who died January 6, 2005 in Baghdad, Iraq when an improvised explosive device struck his Bradley fighting vehicle. He was assigned to the battalion's Headquarters and Headquarters Company.

The 69th Infantry, based at the Lexington Avenue Armory here in New York City, has served as the St. Patrick's Day parade Honor Guard since 1851. Anti-immigrant emotions in that era often led to violence and the Irish troops participated to ensure the safety of the celebration. The National Guard troops of Irish heraldry have led the city parade in every year since.

The Lexington Avenue Armory was listed as a National Historic Landmark in June 1996, and has housed the 69th Infantry since construction was finished in 1906. New York National Guard Soldiers have marched away from the historic building to World Wars I and II and the wars in Iraq and Afghanistan.

The Lexington Avenue Armory has also served as an important cultural venue, serving as the home of the 1913 Armory Show which introduced Modern Art to America, as well as fashion shows today. The New York State Division is currently preparing to execute a $3 million rehabilitation of the armory facade thanks to money provided by the National Guard Bureau.

The 69th Regiment's history and lineage begins when predecessor units were organized in December 1849 in New York City from companies of the 1st Irish Regiment.

The regiment received its nickname as the "Fighting 69th" from Confederate General Robert E. Lee during the Battle of Malvern Hill in 1862 in Virginia.

In World War II the 69th was part of the New York National Guard's 27th Infantry Division and invaded the Islands of Makin and Saipan and fought on Okinawa.

In 2004 the battalion was mobilized for service in Operation Iraqi Freedom. As part of the 256th Brigade Combat Team the battalion secured "Route Irish", the road from Baghdad International Airport to downtown Baghdad. At one time this was termed the most dangerous road in Iraq and the 1-69th turned that around.

Hundreds of battalion members were assigned to the 2008 deployment of the 27th Infantry Brigade Combat Team to Afghanistan for Combined Joint Task Force Phoenix, the training and mentoring mission for the developing Afghan security forces.

The battalion again provided hundreds more of its Soldiers to the 27th Brigade mobilization in January 2012 as troops now train at Camp Shelby, Miss. The Soldiers will conduct missions in Kuwait or Afghanistan and are expected to return home in early 2013.

The American Fallen Soldiers Project was formed to help provide comfort and healing to the mourning families of our fallen military men and women by providing, at no cost, an original portrait of their fallen loved one that fully captures their appearance and personality. When completed, each portrait is personally presented to the family by the artist, Phil Taylor, during a special ceremony. The combined effect of the portrait, personal presentation, and relationship that has been established between the family and the artist, helps provide them a new hope and genuine feeling that their fallen hero has returned home.

To find out more about the organization, visit americanfallensoldiers.com.