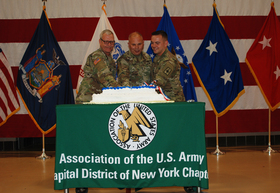 One of the oldest Soldiers present will join a young Soldier in cutting the Army Birthday cake.

The Army National Guard is one of three components of the Army of the United States along with the Active Army and the Army Reserve.

WHAT: A traditional cake-cutting ceremony commemorating June 14, 1775 which the United States Army considers its birthday. On that date the Continental Congress voted to adopt the New England colonial militia troops assembled outside of Boston to confront British troops there. This is considered the creation of the Continental Army. Traditionally the oldest Soldier present joins the youngest Soldier in cutting the Army Birthday cake. The older Soldier represents the history and tradiitons of the Army while the young Soldier represents its future.The Capital Region Chapter of the Association of the United States Army is providing the cake.

World War II artifacts and uniforms from the New York State Military Museum will also be on display as par of the event.

Reporters can interview New York Army National Guard Officers and Soldiers and obtain imagery of the cake cutting ceremony and the historic uniforms on display.

For access to this secure military facility, please contact the Division of Military and Naval Affairs public affairs office at 786-4581.

When the American Revolution broke out in 1775, the rebellious colonies did not possess an army. The revolutionaries fielded a force of colonial troops cobbled together from various New England militia companies. They had no unified chain of command, and although Artemas Ward of Massachusetts exercised authority by informal agreement, officers from other colonies were not obligated to obey his orders.

The American volunteers were led, equipped, armed, paid for, and supported by the colonies from which they were raised.

In the spring of 1775, this "army" was about to confront British troops near Boston, Massachusetts. The revolutionaries had to re-organize their forces quickly if they were to stand a chance against Britain's seasoned professionals.

Recognizing the need to enlist the support of all of the American colonies, the Massachusetts Provincial Congress appealed to the Second Continental Congress in Philadelphia to assume authority for the New England army. Reportedly, at John Adams' request, Congress voted to "adopt" the Boston troops on June 14, although there is no written record of this decision.