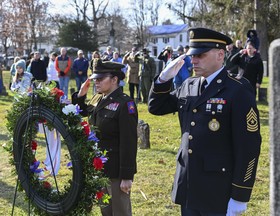 WHAT: Annual recognition of former President Martin Van Buren, a Columbia County native who died on July 24, 1862 in Kinderhook, N.Y. He was born on Dec. 5, 1782. Donnell will present a wreath sent by President Joe Biden. Since the Johnson Administration a wreath from the sitting president is laid at the graves of former presidents on their birthdays by military officers. Taps will be played during the wreath laying.

The United States military honors former presidents by laying wreaths presented by the current president at their gravesites on the anniversary of their birth. This iniative was first directed by President Lyndon Baines Johnson in the mid-1960s and has continued since then.

Van Buren was the first president born as an American citizen rather than a subject of the King of England.

A historical marker on Kinderhook's Hudson Street indicates the site of the Van Buren family tavern, where the president-to-be was born in 1782. He's buried in the family plot at the Kinderhook Reformed Cemetery. Van Buren served in the White House from 1837 to 1841.

His home, Lindenwald, is a national historic site.

Brig. Gen. Denise M. Donnell serves as the Assistant Adjutant General and as the Commander, New York Air National Guard, Latham, N.Y. She is the primary advisor on all Air Guard matters to The Adjutant General.

In this role, Donnell is responsible for establishing policy and monitoring operations of more than 5,800 people assigned to five flying units and four geographically separated support units.

Donnell graduated from Georgetown University in 1993 with a Bachelor of Science degree in Foreign Service and earned her commission through the Naval Reserve Officers' Training Corps program.

After nine years as a naval aviator, she joined the New York Air National Guard at Stewart Air National Guard Base, Newburgh, N.Y. in 2002. She has command experience at the Squadron, Group, and Wing levels. As Commander, 109th Maintenance Group, she oversaw utilization of the nation's only ski-equipped aircraft in support of the National Science Foundation and was Commander of the 13th Air Expeditionary Group, McMurdo Station, Antarctica.

Donnell is a Command Pilot with over 4,400 flight hours. Prior to her current position, the General was Commander, 105th Airlift Wing, Stewart ANGB, Newburgh, N.Y.