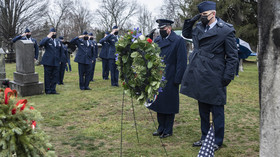 WHAT: Annual recognition of former President Martin Van Buren, a Columbia County native who died on July 24, 1862 in Kinderhook, N.Y. He was born on Dec. 5, 1782. Smith present a wreath sent by President Joe Biden Traditionally a wreath from the sitting president is laid at the graves of former presidents on their birthdays by military officers.