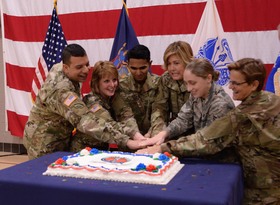 WHO: Major General Timothy LaBarge, the commander of the New York Air National Guard will preside over the ceremony. Airman First Class Caleb Lapinel, a member of the 109th Airlift Wing, based at Stratton Air National Guard Base will represent young Soldiers and Airmen and the future of the Guard. Master Sgt. Roger Townsend, who is assigned to Joint Force Headquarters at the Latham Armory, will represent veteran Soldiers and Airmen and the Guard's history and traditions.

WHAT: Commemoration of the National Guard's 383rd Birthday. The National Guard is the oldest armed service in the United States, predating the American Revolution, and traces its lineage back to the legislation organizing the Massachusetts Bay Colony militia which was approved on Dec. 13, 1636.

Members of the media interested in covering this event must contact the Division of Military and Naval Affairs Public Affairs Office at 518-786-4581 for access to this secure facility.

Some notes from New York National Guard history include:

• The New York National Guard's 42nd Infantry Division served in Iraq in 2005 and was the first National Guard division headquarters to deploy to a combat zone since the Korean War in 1953.