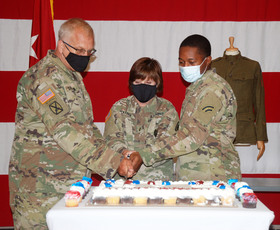 LATHAM, NY (06/14/2021) (readMedia)-- An Army warrant officer who has been in uniform since 1978 and a private first class who has served just over a year, joined forces to cut the Army birthday cake during the New York National Guard's observance of the Army's 246th Birthday on June 14.

In the past year, New York Army National Guard Soldiers have demonstrated their commitment serving as home and overseas, O'Keefe said.

New York National Guard Soldiers have supported combat missions overseas, responded to the COVID-19 pandemic across New York, and deployed to Washington D. C. to secure the city in the wake of the riot at the U.S. Capitol.

"New York Soldiers have met every challenge, tackled every mission, and have always lived up to the National Guard motto of "Always Ready, Always There,'" O'Keefe said.

"Remember that in a time of crisis, when our fellow citizens hear that the National Guard has been called, they know help is truly on the way. We've earned that genuine honor because of our Soldiers and their ability to get the job done-whatever it may be," she said.

The Army marks June 14 as its birthday, because that was the day in 1775 that the 2nd Continental Congress voted to assume command of New England troops outside Boston keeping British Soldiers there at bay following the battles at Lexington and Concord.

Reportedly, at John Adams' request, Congress voted to "adopt" the Boston troops on June 14, although there is no written record of this decision.

Also on June 14, 1775, Congress resolved to form a committee "to bring in a draft of rules and regulations for the government of the Army," and voted $2,000,000 to support the forces around Boston, and those at New York City.

Moreover, Congress authorized the formation of ten companies of expert riflemen from Pennsylvania, Maryland, and Virginia, which were directed to march to Boston to support the New England militia.

Col. Michael Bice, the incident comander for the site, joined Pfc. Luke Storman, and 1st Sgt. Damon Glover in cutting a cake at the vaccination site.

More than 600 New York National Guard Soldiers and Airmen are supporting operations at the convention center, where more than 600,000 people have received the COVID-19 vaccine.

Tomlin, who enlisted in the New York Army National Guard in March 2020 is a member of the personnel section of the 42nd Combat Aviation Brigade. The brigade is headquartered in Latham but has elements in Ronkonkoma, Olean, and Rochester.

Since joining the Army Guard he's qualified as door gunner in a UH-60 Black Hawk helicopter and represented his brigade in the New York National Guard Best Warrior competition.

A resident of the Catskill Mountain town of Kerhonkson, Tomlin works as a direct support professional, assisting those with mental illnesses in daily life skills, and also serves as a member of the Kerhonkson Volunteer Fire Department.

He will major in criminal justice at the State University of New York, Albany in the fall.

So far, Tomlin said, being in the Army National Guard has been great.

"It's given me a chance to do things, most people my age have never gotten to do," he said.

It was an honor to represent the Army's future during the ceremony, Tomlin said.

"I feel really great about this. It gives me a chance to represent something larger than myself, Tomlin said.

Sherman, a resident of Delanson in rural Schoharie County, serves as a warrant officer recruiter in the New York Army National Guard's Recruiting and Retention Battalion.

In 2002 he left the Marine Corps Reserve and in 2003 put a uniform back on again as a member of the Army Reserve. He trained as a Military Police Soldier and deployed to Afghanistan and operated from Bagram.

In 2007, after moving back to New York, he joined the New York Army National Guard and in 2009 he received a commission as a warrant officer and became a member of the Active Guard and Reserve program. He deployed to Afghanistan in 2012 for a second time.

In 2017, Sherman graduated from SUNY Empire State College with a bachelor's degree in business management and economics at age 56, earning a 3.96 GPA.

He was flattered to be approached to be in the June 14 ceremony, Sherman said.

"It is always an honor when you are given the opportunity to represent a great organization like the Army," Sherman said.