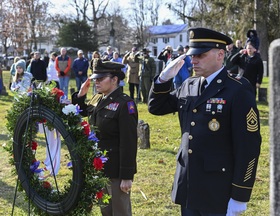 KINDERHOOK, NEW YORK (12/05/2021) (readMedia)-- The New York Army National Guard paid tribute to President Martin Van Buren, in Kinderhook, New York on Sunday Dec. 5, where he was born in 1782 and where lived the latter part of his life before dying in 1862.

Each year, military officers place a wreath from the current occupant of the White House at the graves of deceased presidents on the anniversary of their birth.

The New York National Guard is also responsible for placing wreaths at the graves of President Chester Arthur, the 21st president of the United States, in Albany, and Millard Fillmore, the 13th president, in Buffalo.

Smith and Colling were accompanied by an Honor Guard of ten Soldiers, a Color Guard, a chaplain and a bugler. After presenting the wreath from the White House, Smith and Colling saluted as the bugler sounded taps.

It's an honor to represent President Joseph Biden and recognize the eight president of the United States in the Hudson Valley village he grew up in and retired to, Smith said.

The community involvement is what makes this event so special, said Megan O'Malley, the Superintendent of the Martin Van Buren National Historic Site.

"He was a product of, and a champion of, this community, "O'Malley said.

"Martin Van Buren was too young to be a founding father," Smith said." He wasn't born when the Declaration of Independence was drafted in 1776 and he was five when the Constitutional Convention was held in 1787."

"But he too shaped the future of the young United States, "Smith said.

He held a number of state and local offices and created the first national party, the Democratic Party, she pointed out.

But, Smith noted, that while Van Buren was remarkably accomplished and politically astute, he was not a popular president.

A financial collapse known as the Panic of 1837 followed him into office and the U.S. Army was bogged down in a drawn-out war fighting the Seminole Indians in Florida, she noted.

He was condemned by those against slavery for defending its existence in the Southern states while he was president, but ran unsuccessfully as an anti-slavery candidate for president in 1848.

Van Buren was the first president who had not originally been a British subject. His family descended from the Dutch settlers of New York, and he grew up speaking Dutch as his first language.

Van Buren became a lawyer and ran for the New York state Senate at age 21. He was selected to represent New York in the U.S. Senate in 1821.

Van Buren served as governor of New York before becoming the secretary of state under President Andrew Jackson. He was vice president during Jackson's second term and was elected president in 1836.

He was so skilled at politics that he was nicknamed "The Red Fox of Kinderhook," in reference to his red hair.

Another nickname for Van Buren – "Old Kinderhook" – reputedly prompted the use of the term "OK." Van Buren reportedly initialed documents he approved of as "OK," and his backers formed "OK Clubs."

After losing the 1848 election retired to Lindenwald, his home outside Kinderhook.

"But they were all chosen through democratic processes, and they all sought to do what they thought was the best for the United States," she added.

"By being here today, and taking part in this ceremony, we are affirming that we all have faith in the system that's governed our country since 1791, "Smith said.