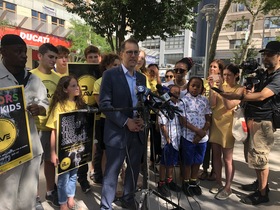 "Our children are smoking flavored e-cigarettes and menthol cigarettes at an alarming and unhealthy rate," said Kevin O'Flaherty, Northeastern Regional Director for the Campaign for Tobacco-Free Kids. "Don't be fooled: Juul has spent millions of dollars to lure kids with their flavors, then hook them with heavy hits of nicotine, making them addicts and forever customers. The New York City Council must crack down on the sale of flavored tobacco – including flavored e-cigarettes, cigars and menthol cigarettes – before it's too late."

Tobacco-Free Kids, Parents Against Vaping e-cigarettes (PAVe), and New York Communities for Change are all part of a larger coalition advocating for the restriction of the sale of flavored e-cigarettes and menthol cigarettes in New York City.

In July, New York City students testified at a congressional hearing that Juul representatives went into their classrooms and told them Juul products were "totally safe" despite containing nicotine and other chemicals. Nicotine is a highly addictive drug that can have lasting damaging effects on adolescent brain development and has been linked to a variety of adverse health outcomes for the developing fetus. One Juul pod delivers the same amount of nicotine as a pack of 20 cigarettes.

"Our city is facing a resurgence of nicotine addiction, driven by an epidemic of flavored e-cigarette use by teens, and the continued allure of flavored smoking products," said City Council Health Committee Chair Mark Levine. "It's no secret that the teen years are critical for brain development and the use of nicotine products in any form, especially flavored e-cigarettes which often have higher levels of nicotine, puts teens at risk for long-lasting effects into adulthood. Any flavored smoking product disproportionately attracts younger consumers. The City Council must step in to prevent a generation of young people from starting a lifetime of addiction by banning flavored tobacco products."

"The youth vaping epidemic is the most serious adolescent public-health crisis this city-in fact, this country-has faced for decades," said Meredith Berkman, a cofounder of Parents Against Vaping E-cigarettes (PAVe), a national grassroots advocacy group founded a year ago by three NYC moms when they discovered a JUUL rep had entered their teens' school through an outside group and told students that JUUL was "totally safe." "The New York State Health department's and CDC's recent warnings about a possible link between vaping and teen lung illness has been very alarming, especially now during our 'Back to School, Not Back to JUUL' campaign. It highlights the necessity of removing flavored e-cigs Including JUUL and other flavored tobacco products from the market because flavors hook kids and keep them from perceiving harm. We won't allow young people to be human guinea pigs for the JUUL experiment or to become a new generation of nicotine addicts!"

"It's time we put an end to Big Tobacco's dangerous, aggressive marketing of flavored products to kids and people of color in New York City," said Michael Davoli, New York Director of Government Relations of the American Cancer Society Cancer Action Network. "The package of legislation being considered by the City Council would help prevent young people from developing a lifelong addiction to nicotine, address the disparate rates of cancer incidence in communities of color and save lives. ACS CAN is proud to stand with parents and social justice leaders from across the city in an effort to improve the health of all New Yorkers."

"For decades, Big Tobacco has targeted our communities, successfully getting young people addicted to menthol cigarettes and making them life long smokers. I've seen too many people die at the hands of Big Tobacco. It's time to stop them and restrict the sale of menthol for good in New York City, " said Ashaina Cumberbatch, Senior Racial Justice Campaign Director at New York Communities for Change.

"E-cigarettes are Big Tobacco's latest tool to hook the next generation of its customers. Juul's devices may look different but it's the same old tactics and what's worse, a new way to burden our children with a lifelong addiction and a range of negative health impacts, including on their lungs. The New York City Council must do more to protect our kids from Big Tobacco's predatory marketing tactics and dangerous products - starting with prohibiting the sale of all flavored e-cigarettes and menthol cigarettes," said Michael Seilback, National Assistant Vice President of State Public Policy at the American Lung Association.