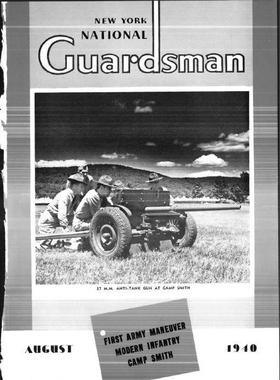 Printed out, that much information would take be 18 feet high if the pages were stacked up, or reach more than 9.7 miles laid end to end..

The digital files include 197 issues of the New York National Guardsman Magazine published between 1924 and 1940, and National Guard annual reports from 1858 to 1955.

It's a treasure trove of information available to genealogists, historians, and military buffs with the click of a computer mouse.

"I can search across 150 different Adjutant General reports in ten seconds and to do this by hand would take me all day," said Jim Gandy, the assistant librarian and archivist at the museum.

"We get 15,000 people through the museum each year, but the website is getting several million hits," Aikey added. "I come from the public library world and the goal is to get as much information easily available, readily available to the public."

The searchable pdf-format files can be opened online and are also downloadable. The cost of the scanning project was $12,000. Biele's Information Technology Systems in West Seneca did the scanning work in 2005. However, the museum's website couldn't accommodate posting the documents until upgrades were made this year, Gandy said.

The Adjutant General's Annual reports contain data on the number of Soldiers and Airmen in National Guard units, training exercises, officers' names and units, and expenses.

The National Guardsman Magazine includes professional articles, reports on unit athletic events and social activities, and period advertising. Publication of the National Guardsman was suspended in the fall of 1940 when the entire National Guard was mobilized in response to the successful German invasion of most of western Europe in the spring of that year.

While the new online documents provide a window to the state's military past that's fascinating to any military history buff, some of the biggest users of the state's records have always been amateur genealogy researches, Gandy said.

Both the National Guardsman Magazine and the Adjutant General's reports are full of names and dates. This kind of information is valuable to people trying to flesh out their family histories and find out exactly what rank Uncle Bill held, Gandy explained.

The demand from amateur genealogists for information is so great that the museum is working on a deal with Ancestry.com, a popular genealogy resource, to make online documents available there, Aikey said.

Putting the documents on line makes them accessible to people around the country, and also allows researchers to look through them without damaging the originals, Gandy added. Too many fingers opening and closing old books and magazines, even when done carefully, eventually wears those documents out.

The collections of the New York State Military Museum date back to 1863 when an officer in the Adjutant General's office was assigned to collect press clippings and other memorabilia about New York regiments serving in the Civil War. Today New York has one of the outstanding state archives of Civil War material, much of it available on line, as well as the largest collection of unit battle flags in the nation.

The Unit History Project section of the Military Museum website includes extensive on-line historical information on all New York Civil War military units, as well as in other conflicts.

To view copies of the New York National Guardsman and the Adjutant Generals Reports on line click on "research" on the New York State Military Museum homepage on the left hand side of the screen. Links to the magazines and reports are below on the Research page.