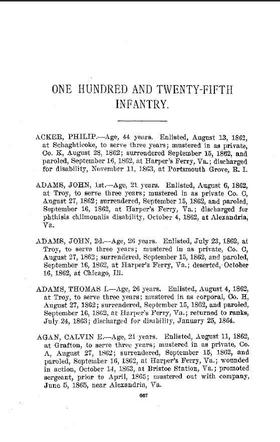 The 1st page of 187 pages listing members of the 125th New York Volunteer Infantry during the Civil War.

The entire roster of New Yorkers who served during the Civil War Years, 1861-1865, is now available online, as well as the five annual reports issued by the Bureau of Military Statistics from 1864 to 1868 that chronicle the accomplishments of New Yorkers in battle.

The Civil War began on April 12 1861 when Confederate cannons fired on Union-occupied Fort Sumter in the harbor of Charleston, South Caroline. On April 19 1861 the New York National Guard's 7th Regiment was mustered into service and departed for Washington to defend the Capitol.

More than 360,000 Soldiers enlisted in New York regiments to fight for the Union during the Civil War. Capsule histories of those Soldiers military records were recorded from 1893 to 1906 in 17 volumes based on data from the New York Adjutant General's Office and the War Department, the predecessor to today's Department of the Army. These records have been posted in PDFformat and are searchable.

The Bureau of Military Statistics was established by the Legislature in 1863 to record the history of New York's volunteer Soldiers by collecting newspaper clippings, artifacts, and securing the battle flags of returning units. The Bureau published five reports summarizing the information collected and detailing the contributions made by New Yorkers during the Civil War. These records are also in searchable PDF format.

That collection of printed materials, weapons, artifacts and battle flags is maintained by the Military Museum today under the control of the New York State Division of Military and Naval Affairs.

Visitors to the museum's website can find out that John Hurley, the assistant surgeon of New York City's 69th Infantry Regiment, who enlisted on Nov. 1 1862, was killed accidently in camp on April 15, 1863 near Falmouth, Virginia. Or they can learn that the towns of Onondaga County collected $8.2 million in taxes to pay bonuses to Soldiers enrolling in volunteer regiments in 1862.

The museum staff has also begun scanning in, and making available online most of the thousands of Civil War newspaper clippings that the museum has preserved since the 1860s.

"The Civil War was a critical time in the history of the United States and of New York," said Major General Patrick Murphy, the Adjutant General of New York. "I am pleased that the New York State Military Museum has been able to make this fascinating information readily accessible to New Yorkers and all Americans."

"With the addition of these new online resources, the Military Museum and Veterans Research Center continues to make important historical and genealogical works from its collection more easily available to the public through our website." Michael Aikey

"Almost everybody who contacts me is amazed at how much we have been able to put online," said museum archivist Jim Gandy. "Without fail they are thankful that it is online because some of the stuff only exists on microfilm so you can't even get it from the library."

The process of digitizing these historic documents began almost eight years ago and has relied heavily on volunteers willing to spend time scanning in documents, Gandy said.

The museum's catalog of its collection of photographs, books, articles, and paintings is also being turned into digital information and is now searchable online, Gandy said.

While the museum holds vast amounts of information about the Civil War and is making that available online, other military data of interest to history and genealogy buffs is also now available online.

Thanks to the efforts of volunteers the names of all 13,025 who served as officers in the New York State Militia, the precursor to the New York National Guard, prior to 1858, have been indexed. Local high school students fulfilling the obligation to spend 20 hours volunteering did much of this work over the last year, Gandy said.

Another volunteer project involved establishing a searchable database of the 23,315 members of the New York National Guard who were awarded the New York State Long and Faithful Service Medal between its inception in 1894 and 1963.

One of those volunteers was Greta Hamilton, a Webster Grove, Missouri resident.

She was doing research on the history of the 369th Infantry, a historically Black New York National Guard Regiment, discovered the museum's website and also discovered that Gandy was looking for people to help digitize records, she explained.

"I told him whatever was pressing I would be willing to work on," she said.

"I learned a great deal about the units of New York and took the time to read up on many of their histories."

"I am curious by nature, so this was really fun. Bottom line anything that will help promote the veteran I am all for it," said Hamilton, a veteran herself.

"I learned that New York (National Guard) was often on the cutting edge of military technology, and in the 1880' and 1890's was frequently far in advance of the US Army in technology and application," Mitchell said. "I learned to have a great respect for our early citizen soldiers, who volunteered their time without any pay what-so-ever, often paying dues and buying their own uniforms in exchange for the privilege of belonging to a local unit."

"I learned that much of our military heritage is forgotten and exists only in scattered records and accounts, and if we do nothing, this heritage will be lost forever. Every time I make an entry in the digital database, I imagine a family member's delight as this entry someday provides another piece of their family's genealogy," Mitchell explained.

The Military History Museum is also the custodian of New York's Civil War Battle Flags. More than 800 flags collected when regiments returned from the war are stored. Many of those have been conserved.

Copies of two publications issued just before and during World War I, the "Rio Grande Rattler" from 1916 and the "Wadsworth Gas Attack "from 1917 are now available for download from the website.

The Rio Grande Rattler was published when the New York National Guard was mobilized and sent to the Mexican Border in 1916 by President Woodrow Wilson following a raid on Columbus New Mexico by the troops of Mexican Revolutionary Poncho Villa. New York National Guardsmen guarded the border with Mexico in 1916 just as they would in 2006.

In 1917, New York's 27th Division was mobilized for service in World War II and trained at Camp Wadsworth South Carolina.

Twenty-three years later the Guardsmen of the 27th Division were again on federal service, this time at Fort McClellan Maryland following President Franklin Roosevelt's activation of the National Guard for one year of service following the successful German invasion of France. The yearbook published for the division's Soldiers that year, which includes photographs of every unit and key officer, as well as pictures of the training, can be downloaded.

•Roster of New York Volunteers during the Civil War: http://dmna.state.ny.us/historic/reghist/civil/rosters/rosters.htm

•Annual Reports of the Bureau of Military Statistics, 1864-1868:http://dmna.state.ny.us/historic/reghist/civil/annual_reports/annual_reports_index.htm