Saratoga Springs museum will close to public on October 8. 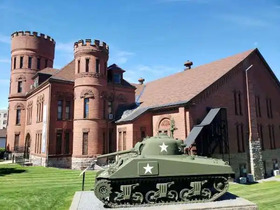 The New York State Military Museum on Lake Avenue in Saratoga Springs will close while roof repairs are underway.

SARATOGA SPRINGS, NEW YORK (10/03/2022) (readMedia)-- The New York State Military Museum and Veterans Research Center will close to the public for four months at the end of the day on Saturday, October 8.

The building at 61 Lake Avenue in Saratoga Springs, will be closed while renovations are done to the roof of the 131-year-old facility.

The museum will still be staffed, as will the New York Army National Guard recruiting office which is in the building.

The museum's digital collections can be accessed at: https://museum.dmna.ny.gov/

The Saratoga Springs Armory was built between 1889 and 1891 to house the New York National Guard's 22nd Infantry Regiment. The building was enlarged around 1906.

The museum was created in the Armory in 2002 and is operated by the New York State Division of Military and Naval Affairs.

The museum tells the story of New York's service and units through exhibits, and programs. The museum staff of six also collects and preserves over 28,000 artifacts and archival materials for study.

The museum's website has more than 77,000 photographs and 1,093 books and documents available online.

• "Battleground for Freedom: New York During the Revolutionary War".

• "Empire for Union: New York and the Civil War".

• "Hot Spots in the Cold War: Korean and Vietnam Wars."

The museum's collection also includes 16,326 photograph collections, 15,875 books and articles, and 2,372 videotaped oral histories recorded by veterans, many of which have been digitized and can be accessed from the museum website. Also online are 2,165 online veterans' interviews.