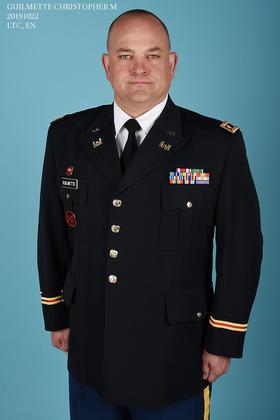 He replaces Col. Todd Bookless, who took command of the Digital Liaison Detachment in 2018. Bookless is going on active duty with the military's Northern Command in Colorado, Springs.

The Digital Liaison Detachment, or DLD for short, works to coordinate, communicate and facilitate all aspects of military operations at higher level-headquarters. The DLD is specifically designed and dedicated to providing a critical capability for mission command liaison and interoperability.

In civilian life Guilmette is employed as a professional engineer with Iron Mountain Data Centers.

From 2010 to 2013 he served as the Brigade Engineer for the 27th Infantry Brigade Combat Team in Syracuse. This included an active duty deployment to Kuwait in 2012.

Guilmette recently returned from a deployment with the 42nd Infantry Division where he served as the Chief of Protection and led the Division's Force Health Protection response to the COVID-19 pandemic.

Guilmette holds a Bachelor of Science degree from Rensselaer Polytechnic Institute. His military education includes the Engineer Officer Basic and Advanced courses, Combined Arms Staff Services School and holds a Masters of Strategic Studies (2018) from the US Army War College.

Guilmette and his wife Kelly have three children.