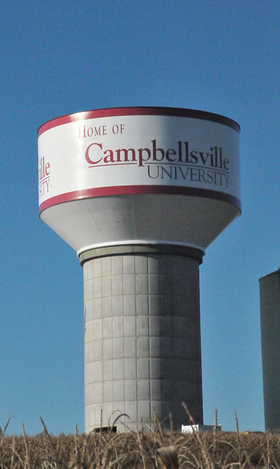 The new water tower is adorned with the Campbellsville University logo on three sides, facing Greensburg, Columbia and Campbellsville. It is located on Highway 55. (CU Photo by Drew Tucker)

"Being a two-time graduate of CU, I care about CU," said Tony Young, mayor of the City of Campbellsville, "and, of course the economic impact that they have in the community is just outstanding."

CU has a total economic impact from its operations of $101 million in Taylor County, according to a new study recently completed by Younger and Associates of Jackson, Tenn.

"We are very grateful to Mayor Young and the City of Campbellsville for the strong support we are given," Dr. Michael Carter, president of CU, said.

"Placement of the CU logo on the new water storage tank is another example of the way our local government leaders are strongly supportive of Christian higher education. We work hard to maintain a good working relationship with our local community and value the support we are receiving," he said.

The logo is positioned on the tank three times. Young said that was so it could be seen from almost any direction, especially from Greensburg, Columbia and Campbellsville.

"The logo is an important symbol of our community at large, as well as the university, and represents our location and our historic identity with this part of Kentucky," Carter said.

"We're excited about it, and we're just getting started with improving the infrastructure for this community," Young said. "We don't want to sit around and wait for industry to come and then try to develop. We're doing everything we can now to position ourselves to be in the right place to take care of any type of industry, or anything that we want to locate here in Campbellsville."

Young said Campbellsville not only supplies water to the City and Taylor County, but that it's also a wholesale supplier selling to Green County, Marion County, the City of Lebanon, East Casey County and LaRue County.

"One of the first things I did as mayor was go around to surrounding counties and say, 'Hey, I'd love to sell you more water. Do you need any more?"'

Most of them said yes. This was because Kentucky was experiencing a drought, and water wasn't as readily available due to low snowfalls and rain.

"We're in the process of working out some plans with surrounding counties, and we'll probably be selling a lot more water," he said.

Usually a project like this takes about two years to complete, but due to budget cuts, it took four.

"That was one of the things we were ready for – to hear about funding," said Young, just as he came into office in 2011.

The mayor's office ended up talking to U.S. Sen. Mitch McConnell's and Gov. Steve Beshear's office. The governor told him to reapply because Kentucky would be receiving more funding the following year. In Summer 2012, Beshear presented the City of Campbellsville with a Community Development Block Grant check for almost $750,000.

"We were very fortunate to be able to continue that planning," Young said.

He said that because the city desperately needed a water tank, financing was established before word was given on the grant. With the grant being approved, the city has extra money and has plans to build another tank behind Taylor Regional Hospital.

"It all turned out," he said. "All of our hard work turned out real well."

The new water tank will increase water pressure, increase the community's water capacity by approximately 200,000 gallons, and improve water quality. It is located on Highway 55 behind UPS. To see more photos on the rising of the water tank, visit our Flickr page.