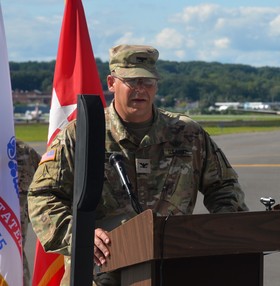 Lefton will replace Col. Michael Charnley who has commanded the brigade since 2019 and will be retiring after a 30-year career.

Members of the press are invited to cover the change of command ceremony.

WHAT: Traditional change of command ceremony in which the flag, or colors, of the 42nd Combat Aviation Brigade will be transferred from Charnley to Lefton by Spencer. Traditionally the unit colors indicate the location of the commander on the battlefield. The ceremony allowed soldiers to see who they would follow in combat.

Coverage Opportunities: Imagery of troops in formation and interviews with the incoming and outgoing commanders.

Jason Lefton, a veteran of the Iraq War, was promoted to the rank of colonel in the New York Army National Guard during a ceremony at the Army Aviation Support Facility in Latham on Tuesday, Sept. 7, 2021.

Lefton, who earned his commission through the Reserve Officer Training Program at Marion Military Institute, began his career as an officer in the 1st Battalion, 156th Field Artillery. He became an Army aviator in 2000.

In 2017, while serving as commander of the 3rd Battalion, 142nd Aviation, he led a support mission to Puerto Rico following Hurricanes Irma and Maria.

Lefton is a graduate of the Command and General Staff College and the Army War College.

He holds a commercial helicopter pilots licenses and a single engine airplane license. He is also a fully registered representative in the financial services industry.

He and his wife Heather have two sons, Mack and Seth.

Colonel Michael Charnley entered the United State Army in 1991 and attended Warrant Officer Flight training, graduating from flight school in 1992. During his active service he served as a Warrant Officer in various assignments in Korea and Fort Campbell, KY before being selected to attend Officer Candidate School (OCS) at Fort Benning in 1998.

After becoming a commissioned officer, Charnley served as a company Executive Officer and Platoon Leader in the 1st Battalion, 10th Aviation Regiment at Fort Drum. In 1999 he deployed to Bosnia as part of a 10th Mountain Division Brigade Task Force .

In 2001, he transferred to the New York National Guard. He deployed in support of Operation Nobel Eagle, the post Sept. 11, 2001 security mission in the United States, and Hurricane Katrina. He also deployed to Panama as the commander of an air ambulance company.

Charnley deployed to Kuwait in support of Operation Enduring Freedom and served as the Garrison Commander of Camp Arifjan in 2012. Upon his return from Kuwait he was assigned as the 42d Infantry Division (ID) Division Airspace Management Officer.

He is a graduate of the Army War College, the Combined Arms and Services Staff School and the Command and General Staff College.

Charnley is married to the former Karen deLancey. They have four children, Nicholas, Matthew, Kathleen, and Joseph and live in Churchville, N.Y.