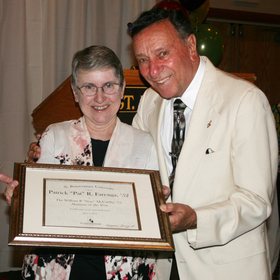 Farenga, of the class of 1952, was presented the William "Stax" McCarthy Award. Named in memory of the former annual fund and alumni director, the award is presented annually to graduates whose continued service to the university reflects the spirit of St. Francis, St. Bonaventure and St. Clare.

A funeral director turned singer, Farenga, of Hartsdale, N.Y., once opened shows for headliners such as Alan King and Pat Cooper. He has often been commended for his service work in Hartsdale and around the world, and in 2004 was named a "Daily Point of Light" by President George Bush in recognition of his volunteer service to his community.

A lifetime member of the Kiwanis Club of Hartsdale, he was awarded the Kiwanis Pediatric Lyme Disease Foundation's Brittany Fellowship award in 2009. He was named Bronx County's Outstanding Citizen in 1974, and in 1981 was awarded a Congressional Medal of Merit and a certificate of gratitude from Boys Town of Italy for organizing relief efforts following a devastating earthquake in southern Italy.

Farenga has long supported his alma mater and is a member of the prestigious Seraphim Society of university donors. He is a volunteer for the university's Office of Admissions and its Annual Fund campaign, a past committee member of the Metro New York Alumni Chapter, and has performed at university events.

Farenga and his wife, Kay, spend six months of the year at the Villas of Bonaventure in Ft. Lauderdale, Fla., and he is passionate in his efforts to connect "Bonaventure North" with "Bonaventure South."