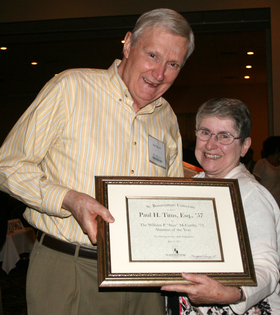 Titus was presented the William "Stax" McCarthy Award. Named in memory of the former annual fund and alumni director, the award is presented annually to graduates whose continued service to the university reflects the spirit of St. Francis, St. Bonaventure and St. Clare.

After graduating from St. Bonaventure, Titus, a native of Bradford, Pa., earned his law degree from the University of Notre Dame. An attorney with Schnader, Harrison, Segel & Lewis of Pittsburgh, Pa., where he has spent his professional career, he handles a broad range of litigation in trial and appellate courts, especially complex business matters.

Titus served as a university trustee from 1988 to 1998 and was a long-standing member and chair of the Academic Affairs Committee. He is a former Trustees Division chair for the university's Annual Fund, and has been a member of the esteemed Devereux Society of university donors since 1987. He served as a reunion class chair for this year's Bonaventure Fund.

Titus was a committee member and major donor to the 1987-1992 Capital Campaign, and a donor to the university's National Endowment for the Humanities Challenge Grant.

He is a former member of the University Arts Council, and he and his wife, Bonnie, donated one of their paintings to the university's permanent collection at the Regina A. Quick Center for the Arts.

He and his wife have three children including a son, John, who graduated from St. Bonaventure in 1991.