Pier A Restoration and Adaptive Reuse in NYC to be honored 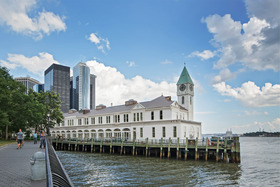 Pier A after restoration. Photograph by Edward Hueber/archphoto

ALBANY, NY (04/27/2015)(readMedia)-- The Preservation League of New York State has selected the Pier A Restoration and Adaptive Reuse in New York City to receive an award for Excellence in Historic Preservation.

"This structure, the oldest functioning pier in New York City, sat vacant and deteriorating for three decades," said Jay DiLorenzo, President of the Preservation League. "Built in 1886 at the tip of Lower Manhattan, it was once a command center for the bustling harbor traffic on the Hudson River. But its floor plan, based on its original use as administrative offices for government agencies, presented significant challenges for adaptive reuse as a public gathering space. As so much of New York's maritime heritage is threatened, this rehabilitation demonstrates how the city can both embrace the historic waterfront's history and give it new life, while preparing for the challenges of a changing coastal environment."

Pier A is the only survivor of a unique maritime complex, but had not been occupied since the departure of the Fire Department of NY Marine Division in 1970. It consists of the head house building, the inshore building, the pier shed, the out shore pavilion and a clock tower building. Pier A is now poised to join play a major role in the cultural and economic revitalization of downtown Manhattan, and reconnect the city to its historic waterfront.

"We are truly honored that the Preservation League has recognized this project," said John Fontillas, AIA, LEED AP, Partner at H3. "For 100 years, Pier A was not open to the public, only after a farsighted restoration by the City of New York and Battery Park City Authority has this essential anchor to Lower Manhattan been renewed as a civic destination."

The awards will be presented at the Preservation League's Awards Ceremony in New York City at 6:00 p.m. on Wednesday, May 13th at the historic New York Yacht Club, 37 West 44th Street.

"With our annual awards program, the Preservation League explores not just the present, but the future of historic preservation. Many of the 2015 award winners provide valuable examples for others by incorporating energy efficiency techniques, adaptive reuse strategies and Federal and State Historic Rehabilitation Tax Credits," said DiLorenzo. "Each year, we are impressed by the number and variety of laudable nominations, and this year was no exception. We are delighted to celebrate the restoration and adaptive reuse of Pier A. We commend all members of the project team for their leadership and vision."