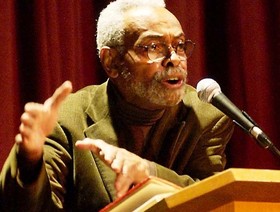 ELIZABETHTOWN, PA (01/24/2012)(readMedia)-- Amiri Baraka, recipient of the PEN/Faulkner Award, the Rockefeller Foundation Award for Drama, the Langston Hughes Award from The City College of New York and a lifetime achievement award from the Before Columbus Foundation, gives two presentations Wednesday, Feb. 1, at Elizabethtown College.

At 11 a.m. the poet presents "Politics, Art and Culture: An Afternoon with Poet Amiri Baraka" in the College's Leffler Chapel and Performance Center, and at 8 p.m. Baraka gives a public presentation/reading in the College's Brinser Lecture Hall, Steinman 114.

Admission to both events is free. Seating is first-come, first-served. It is recommended to arrive at least half an hour early for both events.

Baraka was born Everett LeRoi Jones in 1934 in Newark, N.J. After leaving Howard University and the Air Force, he moved to the Lower East Side of Manhattan in 1957 and co-edited the avant-garde literary magazine Yugen. He founded Totem Press, which first published works by Allen Ginsberg, Jack Kerouac and others.

His reputation as a playwright was established with the production of "Dutchman" at the Cherry Lane Theatre in New York on March 24, 1964. The provocative play subsequently won an Obie Award for "Best off-Broadway Play".

Other examples of his work include poems such as "An Agony. As Now" and "A Poem for Speculative Hipsters." Baraka has become most known for his strident social criticism, often writing in an incendiary style that has made it difficult for some audiences and critics to respond with objectivity to his works.