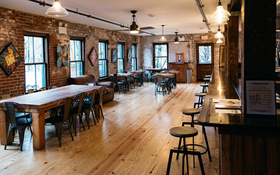 ALBANY, NY (04/25/2018) (readMedia)-- The Preservation League of New York State has selected the reuse of the Poughkeepsie Underwear Factory to receive an award for Excellence in Historic Preservation.

"League staff visited this building around the time that Hudson River Housing acquired it, and appreciates the efforts made to retain and restore the salvageable elements," said Jay DiLorenzo, President of the Preservation League. "At 21,000 square feet, many felt that project was too small to make use of Historic Tax Credits, but a mixed-use approach has delivered 15 units of green and energy-efficient affordable housing as well as a commercial community hub. In addition, the project has provided much-needed open space and access to Fall Kill Creek. The project has illustrated the role that preservation plays in community development, economic vitality and Main Street revitalization."

When it was built in 1874, the Underwear Factory provided job opportunities for Poughkeepsie residents. Now, after many years of abandonment, the old factory is bringing new life to the city's Middle Main neighborhood and introducing economic opportunity to an underserved area. In addition to 15 units of high-quality affordable housing, one third of the property is dedicated to community space. A kitchen and café serves healthy, local food in an inner city neighborhood; a small retail space is a place for local food producers and artisans sell their wares; and a multi-purpose space hosts meetings and community gatherings. Hudson River Housing's restoration of the Poughkeepsie Underwear Factory has not only restored a building, but made it an example of what green business creation and job training can do for a neighborhood.

"Hudson River Housing could not be more pleased with the positive impact the Poughkeepsie Underwear Factory has had on the Middle Main community of Poughkeepsie," said Christa Hines, Executive Director of the nonprofit organization that creates pathways out of homelessness by preserving affordable housing and creating opportunities for people and places to thrive. "All of the hopes, dreams and goals we had set forth for the repurposing of this fabulous historic structure have been realized. We are grateful to the Preservation League of New York State for this prestigious honor. We appreciate the Preservation League's recognition our efforts to preserve the historical features of the building, while also celebrating our efforts to preserve and promote the urban character of this neighborhood and stimulate the local economy."

"With our annual awards program, the Preservation League explores not just the present, but the future of historic preservation. Many of the 2018 award winners provide valuable examples for others by incorporating energy efficiency techniques, adaptive reuse strategies and use of Federal and State Historic Tax Credits," said DiLorenzo. "Each year, we are impressed by the number and variety of laudable nominations, and this year was no exception. We are delighted to celebrate this latest phase in the life of the Poughkeepsie Underwear Factory, and to commend all members of the project team for their leadership and vision."