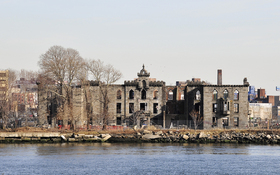 The old Smallpox Hospital on Roosevelt Island has been added to the Preservation League's 2012-13 Seven to Save list.

ALBANY, NY (04/23/2012)(readMedia)-- The Preservation League of New York State has named Manhattan's former Smallpox Hospital, located on Roosevelt Island, to its list of the Empire State's most threatened historic resources, Seven to Save.

James Renwick designed the Smallpox Hospital on Roosevelt Island, which was completed in 1854. In 1976, the New York City Landmarks Preservation Commission referred to the Hospital as a "great Gothic ruin" and noted its incorporation into plans to develop a park on the south end of Roosevelt Island.

A portion of the northernmost wall collapsed in 2007, serving as a wake-up call for immediate and necessary stabilization, a project championed by a colleague organization of the Preservation League, The New York Landmarks Conservancy.

The Roosevelt Island Operating Corporation (RIOC), owner of the Smallpox Hospital, commissioned a stabilization plan for the site, although only had funds to complete phase one of the proposed three-phase stabilization.

"Since 1999, Seven to Save has mobilized community leaders and decision-makers to take action when historic resources are threatened," said Jay DiLorenzo, President of the Preservation League. "A Seven to Save designation from the League delivers invaluable technical assistance, fosters increased media coverage and public awareness, and opens the door to grant assistance for endangered properties."

The Four Freedoms Park Conservancy nominated the Smallpox Hospital to the Seven to Save list in recognition of the site's importance and location between a future Cornell University applied sciences campus to the north and the soon-to-be-completed Louis Kahn-designed Four Freedoms Park to the hospital's south. The park conservancy wishes to see a completed feasibility study for adaptive use of the Smallpox Hospital, as well as additional site stabilization.

"The Smallpox Hospital ruin is important architecture, important to the island's history, and has a beauty and presence that will enhance the new Four Freedoms Park," said Peg Breen, President of the New York Landmarks Conservancy. "It deserves complete stabilization."

According to Gina Pollara, Executive Director, Franklin D. Roosevelt Four Freedoms Park, "FDR Four Freedoms Park Conservancy looks forward to working with our advocacy groups as well as all our State and City agencies to preserve the Smallpox Hospital, as we recognize it takes the collaborative energies and devoted support of many constituencies to safeguard our architectural heritage."

The inclusion of the Smallpox Hospital on the Seven to Save list provides the opportunity for the League to work with local advocates to protect the complex. "With this program, we provide targeted support to seven of New York's most important and endangered historic resources," said Erin Tobin, the Preservation League's eastern regional director for technical and grant programs. "Whether sites are threatened by insensitive, ineffective or insufficient public policies, general neglect, or, in some cases, outright demolition, we have a proven record of working with community advocates to save a number of significant properties."

Since 1999, publicity and advocacy resulting from Seven to Save designation has led to the rehabilitation and reopening of the Oswego City Public Library, the rebirth of Montauk Manor on Long Island, and the rededication of the once-abandoned George Harvey Justice Building in Binghamton along with successes at several other locations.

The Preservation League of New York State is a not-for-profit membership organization founded in 1974. The League invests in people and projects that champion the essential role of preservation in community revitalization, sustainable economic growth, and the protection of New York's historic buildings and landscapes. It leads advocacy, economic development, and education programs all across the state.