Preservation League Names "Seven to Save"

Releases list of most endangered places in New York State 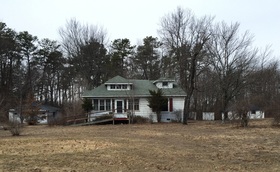 ALBANY, NY (03/02/2016)(readMedia)-- The Preservation League of New York State announced its list of the Empire State's most threatened historic resources, Seven to Save, at a news conference in Albany.

"Since 1999, Seven to Save has mobilized community leaders and decision-makers to take action when historic resources are threatened," said Jay DiLorenzo, President of the Preservation League. "A Seven to Save designation from the League delivers invaluable technical assistance, fosters increased media coverage and public awareness, and opens the door to grant assistance for endangered properties."

An important example of the story of the Great Migration of 5 million southern blacks in the early 20th century lies tucked among shopping malls, highways and a landfill. Today, Albany's Rapp Road Historic District is threatened by deterioration and encroaching development. Located in the Albany Pine Bush, this area once had a rural character that appealed to the early settlers of Rapp Road, members of the congregation of Pastor Louis Parson of the Church of God in Christ in Shubuta, Mississippi.

Built in 1900, the Gould Memorial Library is the masterwork of architect Stanford White. The building reflects a time when scholarly spaces were designed with careful attention to the relationship between structure and function. Initially, the building served as a primary library space when New York University had a northern campus in the Bronx. At present, the Gould has not served as a library in many years, but remains an impressive fixture on campus. It is designated as a City, State and National Historic Landmark.

The Wildroot Company was founded in 1911, and soon became one of the largest hair care product manufacturers in the world. In the 1940s, the company established its headquarters on Bailey Avenue on the east side of Buffalo. This daylight factory building sits adjacent to a railyard, and a nearby neighborhood that was originally developed as worker housing is currently thriving with families. Although the Wildroot building has been vacant and abandoned for many years, the grassroots group Buffalo's Young Preservationists has been advocating for its preservation as an industrial site with great potential for reuse.

For more than a century, this active rail line has contributed to the prosperity of the western and central Adirondacks. Passenger and freight service dwindled over the years (with a brief rebirth during the 1980 Winter Olympics in Lake Placid). In 1992, a group of railroad enthusiasts worked, with the support of New York State, to develop the Adirondack Scenic Railroad. The New York Central Railroad, Adirondack Division Historic District was listed on the State and National Registers of Historic Places in 1993. A draft management plan completed by New York State in 2015 calls for the removal of 34 miles of track between Lake Placid and Tupper Lake. Adirondack Recreational Trail Advocates (ARTA) drove the effort to accommodate multi-use recreational activities including walking, biking, snowmobiling and skiing. A coalition of local and regional preservation advocates, rail enthusiasts and municipal leaders formed the Trails and Rails Action Coalition (TRAC) to present alternatives for this important and historic rail corridor.

The Dutch Reformed Church was built in 1835 to the design of Alexander Jackson Davis, and is listed on the State and National Registers of Historic Places. The structure is also a National Historic Landmark. In 1999, after over thirty years of vacancy and extreme deterioration, the church was recognized as one of the finest examples of Greek Revival architecture with a Save America's Treasures grant. In 2002, the League partially funded the first phase of a historic structure report by Mesick Cohen Wilson Baker through the Preserve New York grant program. In 2006, the World Monuments Fund placed the church on its "Watch List."

The Schenectady Stockade Historic District, listed on the local, State and National Registers of Historic Places, is situated near the Mohawk River. The Stockade was also the first Historic District established in New York State, boasting a mix of early 18th through early 20th century structures. The Preservation League has chosen the Stockade Historic District as the representative for a number of significant historic communities throughout New York State that have suffered severe flooding. Many of New York's historic cities and towns are situated on floodplains, and, unfortunately, "historic" floods seem to be happening more frequently.

The Dennis-Newton House was built circa 1868 for Norman Dennis, an early African-American resident of Ithaca who was born in New York and worked as a laborer and mason. Dennis helped found the first African-American lodge of the Odd Fellows in Elmira, New York. His daughter, Lula, inherited the property in 1893 and transferred it to her husband, Edward Newton, in 1898. Edward Newton worked for the Psi Upsilon fraternity at Cornell University and gradually became a steward for the organization. In the early 20th century, black Cornell students had no central gathering location and wished to have a base for socializing and mutual support. The Newtons hosted a study group and literary society at 421 North Albany Street. The nation's first black fraternity, Alpha Phi Alpha, grew out of these gatherings.

Additional information about each of the designees is are available on the Leagues' website at www.preservenys.org .

The Preservation League draws statewide attention to New York's most important and at-risk historic places. Working in conjunction with local stakeholders, the League has been able to avert demolition, develop plans for reuse, secure landmark designation, and foster greater public awareness of the value of New York's unique and irreplaceable historic resources.

Media outreach, tours, grants and new legislation are among the strategies the Preservation League uses to secure the future of historic places at risk. The League also collaborates with advocates, elected officials and other stakeholders to craft preservation strategies and put these plans to work.

The Preservation League of New York State is a not-for-profit membership organization founded in 1974. The League invests in people and projects that champion the essential role of preservation in community revitalization, sustainable economic growth, and the protection of our historic buildings and landscapes. It leads advocacy, economic development and education programs across New York State.